The U.S. Senate voted yesterday to uphold a Republican-led filibuster against Goodwin Liu, one of President Barack Obama’s most radical judicial picks, effectively ending his chances at a lifetime seat on the federal bench. 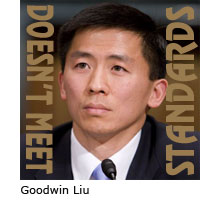 LifeNews.com is reporting that Liu’s nomination for the federal appeals court in San Francisco was stopped when Senate Republicans upheld their filibuster by a 52-43 vote, which has stopped Liu’s nomination from moving forward. Even some of the party’s more moderate lawmakers, such as Susan Collins and Olympia Snowe, voted against Liu. Pro-abortion Lisa Murkowski (R-AK) was the lone GOP vote for ending the filibuster.

During the debate leading up to the vote, Senator Orrin Hatch of Utah, a member of the committee, outlined his strong opposition, saying Liu has “activist judicial philosophy is fundamentally at odds with the principles on which our system of government is based.”

“When I look at Professor Liu’s record, I see that he consistently and strongly advocates an approach that allows judges to find the meaning of the Constitution virtually anywhere they want to look,” Hatch said.  “That is the opposite of the defined, limited role that judges properly have in our system of government. I cannot support someone for appointment to the federal bench, especially to what is already the most activist circuit in the country, who believes judges have that much power.”

Liu’s nomination has been in limbo for over a year and the president had to re-nominate him in January to give him another chance to beat a Republican filibuster, but the plan failed once again.

The American Center for Law and Justice (ACLJ), which is active in reviewing judicial nominees, praised the outcome of yesterday’s vote.

“This is a victory for the rule of law and a sound defeat for judicial activism,” said Jay Sekulow, Chief Counsel of the ACLJ.

“We’re delighted that most Senators understood that the radical philosophy embraced by Goodwin Liu had no place on a federal appeals court.  The vote reflects the fact that most Senators – and most Americans – want judges who will abide by the Constitution and the rule of law, rather than holding an extreme judicial philosophy that’s outside the mainstream of American law.  The vote also underscores the importance of the Senate’s constitutional responsibility of providing ‘advice and consent’ for judicial nominees. This vote should send a signal to President Obama that nominees with a lack of experience and a liberal activist philosophy will not be confirmed.”