Blog Posts
September 15th
St. Teresa of Avila
1515- 1582
I’d like to cut right to the chase: In this little blog on St. Teresa of Jesus (Avila), who we Discalced Carmelites call “Our Holy Mother,” I’ll simply share three ways in which her life and teaching on prayer has touched my life. Hopefully some of these insights will enrich you as well.

The life of St. Catherine of Genoa confirms that spiritual renewal, virtue, holy reflection, and spiritual direction lead to wisdom and discernment. Born into an illustrious Italian family that was connected to two popes, Catherine was known as a quiet and pious child, being both prayerful and obedient. She expressed an interest in the convent at the age of thirteen but she was turned away because she was too young.

Most of us are familiar with Saint Monica, the mother of the great Saint Augustine. As the story goes, Monica had a wayward child in her son Augustine. He was a great success, but he wasn't living a moral life and he wasn't growling in holiness. In fact, his behavior was leading him away from holiness and away from God altogether. Back at home, his mother, Monica, prayed fervently for the conversion of her son, Augustine. Not only was St. Monica's prayer time consumed with the conversion of her son, but also with the conversion of her husband, who was known to be adulterous and abusive to Monica. St. Monica persisted in prayer. God would reward this beautiful Saint for her endless petitions with the answer to prayer she had sought for so long!

The Chaplet of The Holy Ghost

Today we celebrate the great Feast of Our Lady of Fatima and the prophetic series of miraculous apparitions in which she gave us God's peace plan for the world. Our Lady of Fatima instructed us to, “Say the Rosary every day to bring peace to the world and the end of war.”
Women of Grace, in union with the United States Conference of Catholic Bishops, invites all of our friends to join in fasting and praying the Rosary today. Honor Our Blessed Mother in this small way! 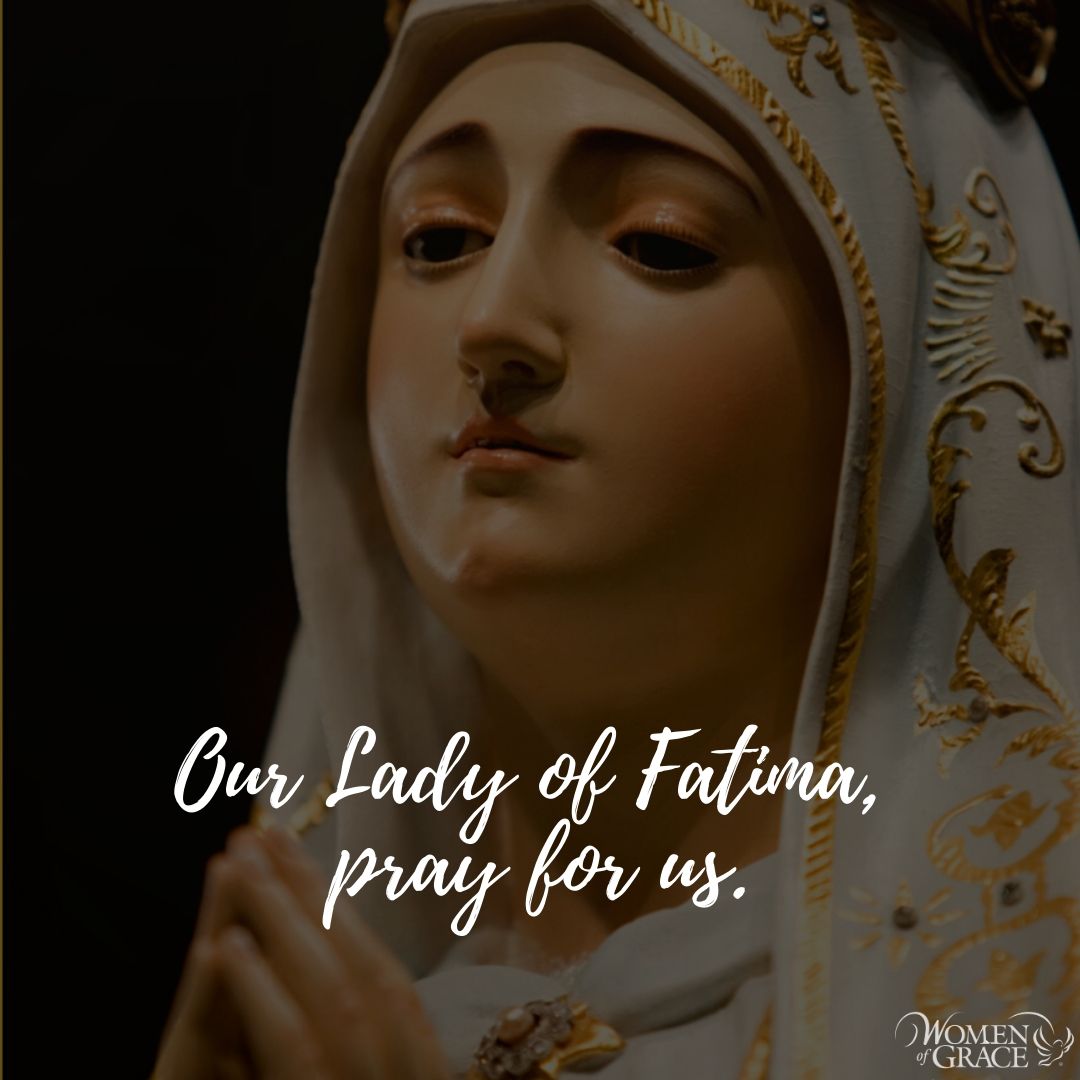 St. Gianna Beretta Molla, is not only a contemporary saint, but a saint for the contemporary woman! This was a woman who loved God, loved her husband, loved her children and raising them, and even had time to devote herself to charity and a profession, a physician no less! What an inspiration St. Gianna is to us modern-day women, who also try to juggle faith, family, and work. On top of that, she is always seen with a smile on her face, evidence of the true joy she experienced from living this ordinary life for the Lord!

(Johnnette with the volunteer team at Holy Name of Jesus Parish)

What a blessing it was to come together with our Sacred Sisters in Harrisburg Pennsylvania! Johnnette led us through faith-filled presentations and unpacked how to live out authentic femininity in the midst of suffering and uncertainty. After so much time apart, you could feel the relief and joy in the room to be with sisters in Christ once again! Together we were emboldened to stand firm on the teachings of the Church and forge ahead in trust-filled hope.

A woman born into stature and a faith-filled home, raised to be a social figure in society based on the wealth and philanthropy of her family, groomed with kindness and a love of God and neighbor, turns the tables on what was supposed of her, what was expected of her, turns her life, and fortune, over to God!St. Katharine Drexel was born in Philadelphia, Pennsylvania, November 26, 1858, the second daughter to her father, Francis Anthony, who was a wealthy international banker and his wife, Hannah Langstroth, who lost her life only 5 weeks after Katharine’s birth. Katharine and her older sister, Elizabeth, gained another sister, Louisa, from their father’s second wife, Emma Bouvier, who was a very loving and nurturing mother and an exceptional influence on the girls’ lives.

The girls were privately tutored and received an excellent education as you would imagine, which included extensive travel throughout the United States and Europe. It was on these trips that a special compassion grew in Katharine’s heart. A compassion for Native Americans and African Americans, two impoverished groups she knew she wanted and needed to help.

The girls were already being raised with a heart of charity as their family accepted homeless into their home and provided financial help and goods, like food and clothing, to those in need on a weekly basis. Their parents, Francis Anthony and Emma, set a good example of living a Christian life and the girls were formed in this way. They lived a life of prayer and charity, and used the gift of their wealth to aid others when and where they could, and taught their daughters to do the same.

Katharine was blessed to receive spiritual direction from a longtime family friend, Father James O’Conner. She spent a lot of her time with Father O’Conner and sought his advice on many things. Katharine made her social debut in 1879. Many of course expected her to marry and many asked for her hand in marriage, typical for an heiress. Katharine had another proposal growing her heart, a desire to join a contemplative order. Father O’Conner suggested she wait and pray.

Then, an event began to transpire in Katharine’s life that would change her forever. Her mother, Emma, was diagnosed with and battled cancer for three long years, ultimately losing her life in 1883. Katharine was devasted. She learned through this experience that no amount of money or even good works, can prevent suffering in one’s life.

A trip with her family to the Western states in 1884 really confirmed in her heart what she already knew, that she needed to help the Native Americans. This was the beginning of many missions and missionaries in the United States for Native Americans.

Francis Anthony died in February of 1885 and his fortune was willed to his three daughters. As a smart business man, Francis wrote up his will in a way that protected his daughters from men who may only be looking to marry them for their money and would provide even his future grandchildren, should there be any, with a fortune. If his daughters produced no children, his Drexel estate would be distributed to different religious orders and charities, including the Society of Jesus, the Religious of the Sacred Heart, a Lutheran Hospital, the Christian Brothers, and others. The girls themselves ended up sharing an inheritance of $14 million dollars.In current dollars, that would be equivalent to $400 million.

One of the first things the girls did with their inheritance was contribute money to help the St. Francis Mission on South Dakota’s Rosebud Reservation.

During a trip to Europe in 1887, the sisters were blessed with a private audience with Pope Leo XIII. The women asked him for missionaries to help staff some of the Native American missions they were financing. The Pope suggested that Katharine become a missionary herself-the women were quite surprised. Katharine however was receiving confirmation of a seed already growing in her. She entered the Sisters of Mercy Convent in Pittsburgh in May 1889 and professed her first vows as a religious sister on February 12, 1891. She dedicated herself to working with Native Americans and African Americans in the western and southwestern United States. The social sphere was blind-sided by the news evident by this headline in The Philadelphia Public Ledger, “Miss Drexel Enters a Catholic Convent—Gives Up Seven Million.”

In the midst of Katharine becoming Mother Katharine and establishing her own religious congregation, the Sisters of the Blessed Sacrament, her younger sister Louisa married General Edward Morrell in 1889. The Morrells worked very hard to advance the welfare of African Americans and used their wealth to build institutions that educated them and created upward mobility for them. General Morrell even continued the work with the Native Americans while Katharine was a novitiate.

Louise and her older sister, Elizabeth, founded St. Francis Industrial School in Eddington, PA, in honor of their father, Francis. The school was a ‘next step’ for young men after they left orphanages that they outgrew. Sadly, shortly after, Elizabeth and her baby died from complications during childbirth in September 1890.

All three Drexel daughters were mirroring the life that their parents had lead and what they instilled in them, charity and good will towards those who are in need. Word spread about their desire to help from all over the United States.

The Sisters of the Blessed Sacrament opened the boarding school, St. Catherine’s Indian School, in Santa Fe, New Mexico. Mother Katharine staffed a mission to the Navajos in Arizona and New Mexico on a 160-acre piece of land she purchased, with the Order of Friars Minor from Cincinnati, Ohio. She also funded their work among the Pueblo Native Americans in New Mexico.

In all, St. Katharine Drexel established 145 missions, 50 schools for African Americans, and 12 schools for Native Americans, in addition to finding Xavier University of Louisiana, the only historically black Catholic college in the United States.

St. Katherine Drexel died on March 3, 1955, at the age of 96 and is the second American born Saint to be canonized. The Sisters of Mercy no longer exist on the Drexel fortune, yet they continue their work with African Americans and Native Americans in 21 states and in Haiti.

-St. Katharine Drexel is an excellent example for us, especially during the Lenten season. Giving up everything for God and others. Examine your conscience.  How can you give up more? How can you help others? Ask St. Katherine Drexel to help you in these areas.

-St. Katharine Drexel had a special mission for those less fortunate. She didn’t only help a little, she actually built schools and institutions that educated and helped to create a life for those in need. Schools and institutions that are still active today! We are not all blessed with a fortune like the Drexels, but in what way can you take helping the less fortunate to a different level? Are you tithing to the Catholic Church? Can you tithe more during this Lenten season?

-St. Katharine Drexel and her sisters were blessed with parents who were actively living their faith and not only taught their daughters through their actions but engaged them in a life of prayer and charity. For parents, are you living your faith for your children to see? Are you teaching them the faith, that they may take it with them into their adulthood? What more can you do? For everyone, are you living your faith in your workplace, school, and social circles? When you do, you will be asked about it, and you may have the opportunity to help shape and form someone’s life towards Christianity. Are you a good representation of the Catholic faith? Take this into prayer.

For information about this and other Women of Grace saints, join one of our many opportunities to connect at womenofgrace.com/connect.

Happy February to you and your family, the month when we celebrate love, marriage, and the Holy Family!

Thank you for your continued partnership in our mission to transform the world one woman at a time. I'm so grateful for you!