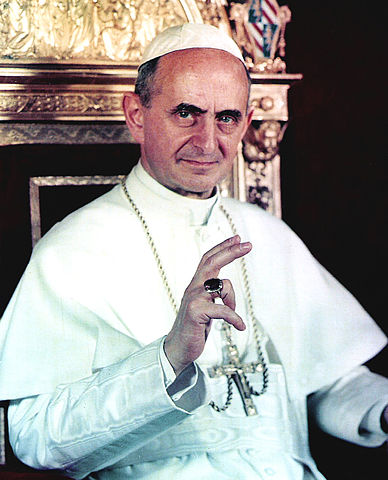 The Vatican has announced the official feast day for Pope St. Paul VI which will be celebrated annually on May 29 as an optional memorial.

CNA/EWTN News is reporting on the announcement made February 6 by Cardinal Robert Sarah, prefect of the Congregation for Divine Worship. Even though feast days are usually celebrate on the date of the death of a saint, which is considered to be their birth into eternal life, Paul VI died on August 6, 1978, a date which marks the Feast of the Transfiguration of the Lord. Therefore, an alternate date was chosen, that of May 29, which is the anniversary of his ordination into the priesthood in 1920.

Known as Father Giovanni Battista Montini at the time, he began his service to the Holy See four years after his ordination, serving both Pius XI and Pius XII before becoming Archbishop of Milan. He was elected pope in 1963.

The author of Humanae Vitae who guided the Church through the turbulent birth of the sexual revolution, Pope St. Paul “lived with his gaze constantly fixed on Christ whom he considered and proclaimed as a necessity for everyone,” Cardinal Sarah wrote.

“The Church was always, indeed his constant love, his principal concern, the object of constant reflection, the first and most fundamental thread of his whole pontificate. He wished nothing other than the Church would have a greater knowledge of herself in order to be ever more effective in proclaiming the Gospel.”

Just before his death, Paul VI wrote in his meditation, “Pensiero alla morte, I pray that the Lord will give me the grace to make of my approaching death a gift of love to the Church. I can say that I have always loved her and I feel that I have lived my life for her and for nothing else.”