JE asks: “Would you consider the presence of a Dream Catcher an open door to the occult? I’ve never been comfortable with their use for children  . . . I have a necklace & earring set of Dreamcatchers sitting in my jewelry box. . . . (A)fter reading about some of your other posts about jewelry I’ve been thinking that in addition to pitching the “Mary Poppins” book set I never got around to reading, I should pitch the Dream Catcher jewelry as well. Could you maybe tell us a little more about what to look out for in jewelry? Or would that be a whole ‘nother Learn to Discern book?” 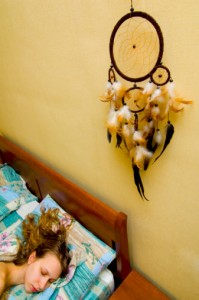 We all need to be careful about the kind of jewelry we wear and avoid anything that has to do with the occult. Just as the wearing of Christian symbols denotes allegiance to God, sporting occult symbols gives the impression that we’re dabblers in the dark arts. Even though this could be the furthest thing from our minds, allowing these symbols to dangle from our ears or around our necks can be seen by others as a tacit endorsement of what those symbols represent. We need to show the world our respect for the symbols of Christ, not the latest in kabala bracelets.

Another kind of jewelry to avoid is anything worn as an amulet, such as an Eye of Medusa bracelet or Hamsa Hand, because this is a superstition.

As for the dream catcher, this tradition is part of the shamanistic beliefs of Native Americans. The original dream catcher is said to have originated with the Ojibway (Chippewa) tribe although other tribes such as the Lakotas also lay claim to the object. For instance, a Lakota legend says the dream catcher was given in a vision to a spiritual leader by a spirit named Iktomi, a searcher of wisdom, who appeared in the form of a spider. Using the leader’s willow hoop, which was decorated with feathers and beads, Iktomi began to spin a web that represented the good and bad forces of life. When he was finished, he had created a web in the shape of a perfect circle with a hole in the middle. He gave it to the leader and told him to allow his people to use the web to achieve their dreams. If they believe in the great spirit, the web will filter their good ideas and trap the bad ones.

Because Native Americans believe that the night air is filled with dreams, both good and bad, they would hang a dream catcher over or near their bed at night in order to filter their dreams.

Obviously, this is a superstition based on a pagan belief system. Even though dream catchers (and anything Native American for that matter) are all the rage these days, I would pass on decorating my house – or myself – with any of these symbols.