AS asks: "I would appreciate an article from you on your blog about Harry Potter to share with people." 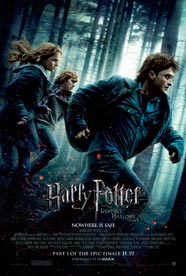 At any rate, I have many solid reasons for being against the proliferation of Harry Potter and Potter-like books that promote sorcery to children. Here are the top three:

The spells and rituals in the Harry Potter books aren’t the figment of author J.K. Rowling’s imagination. They’re real. For instance, in the first book alone, former occult practitioner and expert Toni Collins lists the “Sorting Ceremony” described on pages 117-122, the Body-Bind spell on page 273 and brews listed in Professor Snape’s potions class on pages 136-139, as being authentic. She said only someone who has engaged in these practices would know they weren’t fantasy, and only someone who had done meticulous research into Wiccan practices could have written them. (See http://www.envoymagazine.com/harrypotter.htm )

Collins is far from alone. Other former occult practitioner, such as Steve Wood, host of St. Joseph’s Covenant Keepers radio show, also confirmed that he used many of the rituals that are casually described in Potter books.

Perhaps the most telling confirmation that the books teach true sorcery comes from exorcists themselves, all of whom unequivocally condemn the books. Rome’s infamous exorcist, Fr. Gabriele Amorth, told the Italian ANSA news agency in December, 2001 that “behind Harry Potter hides the signature of the King of darkness, the devil.”

He and other exorcists condemned Rowling’s misguided portrayal of magic as being either “white or black” – a distinction that does not exist in real life. Magic is “always a turn to the devil,” he says, no matter what color you call it.

This is another major reason why Potter books should be avoided.

In his book, A Landscape with Dragons: The Battle for Your Child’s Mind,  best selling author Michael D. O'Brien protests the distorted way in which Rowling’s book portray the occult as “liberating, noble, exciting, and not what your parents and Christians in general say about it. Coupled with this message is the gross characterization of traditional families and anyone else who objects to the occult as abusive hypocrites . . .The whiff of morality makes them that much more deceptive. In this way, the moral order of the universe is deformed in a child’s mind far more effectively than by blatantly evil books.”

For instance, the books teach children that they can resort to an evil means if it brings about a good end. One can use magic to get a girl to like them, or to punish a foe. But what the books don’t tell the child is that the forces that are harnessed with magic spells are very real, very demonic, and use of them always ends badly for the practitioner. (My booklet on Magick gets into these grisly details – click on the New Age Resources button on the navigation bar above for more information.) The only people who would promote the teaching of sorcery to children are those who are either occultists themselves or who have no practical knowledge of the occult. � O’Brien is particularly disturbed by the fact that otherwise sensible people promote these books full of dangerous distortions and occult practices specifically forbidden by God to innocent children. The fact that this is happening even in Catholic households and schools is a sign of “a grave loss of discernment,” he says.

#3 – The Books Inspire Children With A Fascination for the Occult

Anyone who thinks Potter books don’t inspire an unhealthy fascination in the occult in children needs a reality check. The advent of the Harry Potter series unleashed an avalanche of occult fiction that are now the top selling categories in the children and teen market.

For example, Hollywood’s occult themed movies aimed at young adults, such as Buffy the Vampire Slayer, Sabrina the Teenage Witch, and Charmed, are all churning out paper-back series that have become the rage with young teens. Instead of reading Nancy Drew mysteries and the Babysitter’s Club, young girls are reading about Buffy’s near rape by her love-interest, Spike, or watching her die and then “resurrecting” herself by climbing out of a grave.

Then there’s the controversial Goosebumps series for grade school kids and the Fear Street books for adolescents that intertwine the teen world of cheerleading and sports with supernatural evil. T-Witches contain the escapades of twin daughters of two powerful witches and Midnight Magic touts the use of tarot cards.

All this – and I have yet to even mention the latest vampire-inspired occult thriller  – Twilight!

Those people who boo-hooed talk of a Potter-inspired rush to sorcery among youth (they called us hysterical back in 2001) are in dire need of a “come to Jesus” moment (pun intended).

I might also add that Pope Benedict XVI is no fan of Potter or its ilk. His personal condemnation of the books was uncovered in a letter from then-Cardinal Joseph Ratzinger to Gabriele Kuby, author of Harry Potter – Good or Evil?  Apparently, Kuby sent the Cardinal a copy of her book and he responded in a letter dated March 7, 2003, in which he thanked her for the “instructive” book.

“It is good that you enlighten people about Harry Potter because those are subtle seductions, which act unnoticed and by this deeply distort Christianity in the soul, before it can grow properly,” he wrote.

Ironically, the Cardinal also suggested in the letter that she send a copy of the book to the same Vatican prelate, Msgr. Peter Fleetwood, who said during a Vatican Radio program that Harry Potter books were okay. Msgr. Fleetwood’s comments were broadcast around the world as “Vatican Approves of Potter” even though the Vatican has never made an official statement on the books.

I could go on and on about Harry Potter, but this should suffice for now.

For a better understanding of the occult and how it manifests in our culture, our Learn to Discern: Is it Christian or New Age series contains several books on this subject, including Magick, Witchcraft/Wicca and Psychics/Channeling. For more information, click on the “New Age Resources” on the navigation bar above.