GF writes: "I can’t find info on Tarot Cards in you Blog, Blog Index, or Self Help sections. I’m looking for something concise to give to a friend." 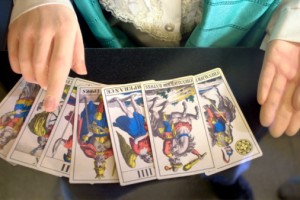 I'll try to make this as short as possible while still including what I believe are the most important facts to know about tarot (pronounced tar o) cards.

The use of tarot cards is the most serious form of divination by cards. The practice of foretelling the future with a deck of tarot cards is also linked with magic, numerology, astrology and other cults. In the present day, tarot cards are used for both divination as well as to cultivate intuition and psychic ability. Practitioners believe that when laying out the cards, they will fall into positions that inevitably relate to the subject of the reading.

The typical tarot deck is comprised of 78 cards which are divided into the Major and Minor Arcana. The Minor Arcana is made up of 56 cards which are divided into four suits - Pentacles, Wands, Cups, and Swords - which are usually linked to the four elements of earth, air, water and fire. The Major Arcana has 22 cards containing symbolic pictures such as The Emperor, The Tower, Death, The Devil, etc. These cards are said to represent the legends, myths, philosophies, religions and magic beliefs of the human race.

“Practitioners of Tarot believe that these enigmas, images and series represent the sum of the knowledge of all sciences, particularly astrology,” writes Father William Saunders, “and that the permutations in ‘dealing the cards’ is capable of revealing the future and solving all problems.”

The most popular deck in use today is the Rider-Waite deck which was developed in the early twentieth century by occultist A.E. Waite, a member of the Hermetic Order of the Golden Dawn. However, there are literally hundreds of different tarot decks available today, such as decks for witches, feminists, Native American, Celtic and even decks with fairy tale themes for children.

Although there are many theories about the origin of tarot cards, most historians agree that they did not appear until the 1440s, with the earliest mention of their usage dating to 1391. The suit-cards used in the game were the same as standard Italian playing cards of the time.

From Italy, the game spread to France, then Switzerland, Germany and beyond. By the sixteenth and seventeenth centuries it had become a popular parlor game where people would create associations between themselves or another and a particular card. Instead of having any special meaning, the subjects on the cards were worked into verses as playful exercises of verbal agility, humor and flattery.

The hundred years between about 1730 and 1830 were the heyday of the game of Tarot. However, it was also at this time that the use of the cards began to turn toward the occult. An eighteenth century French Huguenot pastor named Antoine Court de Gebelin (1719-1784) who was active in Parisian freemasonry circles and the Philalethes (a French Masonic occult order) became an accomplished occult scholar. He immediately saw occult connections in the symbols on the cards, which he believed were linked to ancient Egypt, although this connection has never been substantiated.

He published these speculations in 1781, suggesting that the tarot be used as a method of divination. A fortune teller known only as Etteilla picked up on the idea and published a book in 1783 detailing a methodology for tarot cartomancy. The use of the cards for fortune-telling continues to this day.

It was not until the twentieth century that tarot was adopted by various New Age enthusiasts, neo-pagans and fortune tellers, as well as people who were merely interested in using the deck for self-exploration.

Aside from breaking the first commandment, the Catechism also cites the use of these cards and other devices of divination as wrong because they “conceal a desire for power over time, history, and, in the last analysis, other human beings, as well as a wish to conciliate hidden powers" (Sec. 2116).

But is it a sin to go to a card reader?

“It is a sin of superstition that, depending on the circumstances, can be more or less grave,” says the famous Rome exorcist, Father Gabriel Amorth. “For example, if someone asks for a card reading out of sheer curiosity, to hear what he will be told, he commits a venial sin. But more importantly, he also risks forming a habit and aggravating the sin.”