DV writes: "What did the Pope mean when he said 'this would represent a kind of mental schizophrenia which 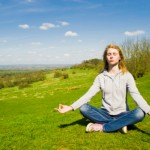 could also lead to psychic disturbances and, at times, to moral deviations, especially the psychic disturbances.'  I would like a deeper understanding of what he was warning about.   I have a friend who did Yoga exercises and I go to a catholic chiropractor where the company promotes yoga classes, but one other chiropractor is an evangelical Christian. I'm not tempted to join, especially now that I read your article.   DV continues: "This quote above came from your article where you write,  'In the CDF’s 1989 Letter to the Bishops on Some Aspects of Christian Meditation, then-Cardinal Joseph Ratzinger warns that body positions coupled with breathing techniques and meditation can have a calming effect on people that can be misinterpreted as spiritual wellness rather than just the relaxation exercise it is. “Some physical exercises produce pleasing sensations of quiet and relaxation, perhaps even phenomena of light and warmth which resemble spiritual well-being,” he wrote. “But to take such feelings for the authentic consolations of the Holy Spirit would be a totally erroneous way of conceiving the spiritual life .. . . (W)hen the moral condition of the person concerned does not correspond to such an experience . . . this would represent a kind of mental schizophrenia which could also lead to psychic disturbances and, at times, to moral deviations.” What the pope is warning about in this statement is the possibility of delusion in a person who mistakes the pleasant feelings often associated with physical exercise to be coming from God when they are not. (Persons suffering from schizophrenia experience false perceptions, distorted thoughts, unrealistic beliefs, and disorganized thoughts such as nonsensical associations.) A person who is not familiar with the spiritual life could easily mistake these feelings as communications from God telling them that everything is okay, even though they may be living a sinful life. Deluding themselves into thinking they have God's approval may even cause them to further embrace this lifestyle. As for the psychic disturbances, this is also mentioned in the document, Jesus Christ, the Bearer of the Water of Life. “Rebirth, biofeedback, sensory isolation, holotropic breathing, hypnosis, mantras, fasting, sleep deprivation and transcendental meditation are attempts to control these [altered] states and to experience them continuously. These practices all create an atmosphere of psychic weakness (and vulnerability)." (Section 4) Psychic disturbances can occur any time we engage in a practice that is designed to induce an altered state of consciousness, which is the intent of all eastern meditation techniques such as  yoga, transcendental meditation (TM), centering prayer, etc. When we enter an altered state, we leave our minds wide open to all kinds of influences, much like a person leaves their mind open to the suggestion of a hypnotist. The Irish Theological Commission explains in the 1994 book, A Catholic Response to the New Age Phenomena: “The danger that is not pointed out is that in this state [emphasis in original] of so called cosmic consciousness people are open to spirit influences without being in control, for they have surrendered to this 'consciousness'.” Maggie Moulton, a former TM teacher, experienced these “psychic disturbances” first-hand and gives a chilling account of her own numerous encounters with them in the book by Father Lawrence Gesy, Today’s Destructive Cults and Movements. Moulton once awoke in the middle of night to find two “transparent” creatures wrestling at the foot of her bed. On another occasion, a spirit with a bright golden aura appeared to tell her, “This is your color.” The “Academy” where she studied TM in the mid 70's was “alive and vibrating with psychic energies,” she said.  Meditation techniques such as TM can open people up to the spiritual realm as readily as a seance or ritual, she said. “And once you open that door, you have very little control over the outcome. It’s like getting on a carnival ride - you choose to climb into the seat, then you ride out the ride.” For Moulton, it was often a rough ride during her 10 years of involvement in TM, a ride that, in many ways, left her permanently scarred. “I have been very active in my parish and my faith is very important to me. Yet still, I don’t have a deep, solid, unchanging belief. I don’t have peace. I don’t have joy,” she writes. “It is as if it [TM] ‘blew out’ the belief circuitry in my brain. I envy those who have a simple faith and joy in their beliefs.” DV, you are wise to avoid becoming involved in any of these practices!