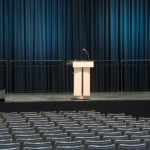 Joel Osteen has definitely been accused of preaching his own version of the New Age "prosperity gospel" - which is the notion that God wants everyone to be rich and doles out blessings in the form of megabucks to just about anyone who asks.

In the late 1980's, while I was still away from the Church, I fell victim to this "gospel." I was down on my luck at the time and it told me what I needed to hear - that the reason we're poor is because we don't take Jesus at His word. Jesus said "Ask and you shall receive" so if we don't have, it's because we haven't asked. Or so the theory goes.

Of course, what the prosperity gospel never tells you about are all the other things Jesus said, such as the necessity of taking up our cross daily, selling all that we have,and putting all of our faith in God's providence. None of those things jive with the prosperity gospel, which has a very worldly view of Jesus. It makes Him into a kind of Santa Claus who is just sitting up in heaven waiting for His chance to make all of our wildest dreams come true.

As nonsensical as that sounds, recent polls show that 17 percent of Christians believe in the prosperity gospel. Sixty-one percent of Americans in general say they believe God wants them to prosper.

This could explain why Osteen, who preaches this gospel with extraordinary power, has accumulated such a fortune. He invested $95 million in renovating Houston's former Compaq Center into what is now known as the Lakewood Church. It seats 38,000 and is the largest regularly-used worship center in the United States. The facility has eight giant video screens, 12 elevators, three escalators, two waterfalls, 241 toilets, 65 urinals and parking for more than 7,000 vehicles, according to a 2005 article appearing in Charisma Now.

Criticism caused him to discontinue his $200,000 a year salary from the church to live off his book proceeds, which are far from meager. Forbes magazine reported in 2009 that he was expected to make $13 million on his second book deal, Become a Better You, which was published last year. His first book, Your Best Life Now, sold more than five million copies with several spin-offs and he has since published a third book.

The man's success cannot be understated. According to Nielsen Media Research, Osteen is the most watched inspirational figure in America. His weekly sermon is broadcast into every U.S. television market where it is viewed by seven million Americans each week and more than 20 million each month. His weekly broadcast is also seen in almost 100 nations around the world.

For all his wealth and notoriety, Osteen definitely has enemies within the Christian mega-preacher community, reports Christianity Today . They criticize him for the scarcity of references to Jesus in his books, the absence of a cross on his "stage," his refusal to talk about sin, and his lack of theological training. Some say he's not a preacher at all but a secular self-help showman who sells platitudes and false hope.

One of most outspoken critics of this kind of "prosperity preaching" is Rick Warren, the California megapastor who gave the invocation at Obama's inauguration: "This idea that God wants everybody to be wealthy? There is a word for that: baloney," Warren told Time. "It's creating a false idol. You don't measure your self-worth by your net worth. I can show you millions of faithful followers of Christ who live in poverty. Why isn't everyone in the church a millionaire?"

However, it should also be noted that Osteen's ministry does much good work in the world in the form of feeding the poor and providing medical supplies to hungry children and families around the world. Joel Osteen Ministries is also involved in vaccination programs, abandoned baby centers, and centers for young troubled teens in need of help putting their lives back together.