PM writes: "I have MS and have been to many physicians. A local chiropractor has a new therapy using tuning forks and life energy. I am a Catholic and am suspicious of some of these 'cures' that have been postulated. These tuning forks are said to redirect the energy in the body. Do you think this is for real?" 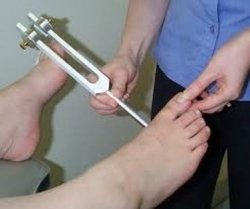 Healing with tuning forks is not for real because it is based on the manipulation of a universal life force energy that does not exist. If the energy itself doesn't exist, this means nothing is being balanced and, therefore, no healing is taking place. But what about all those testimonials from people who claim they've been healed of everything from cancer to fractured hips? It's called the placebo effect, which is much more powerful than most people realize.

Tuning fork practitioners believe that a universal life force energy flows through the body through a network of meridians or chakras. When we become sick or stressed, this energy gets blocked and our energy gets "out of tune" with the universe. What it needs is a tune up with a tuning fork! (If only it was that easy!)

"The powerful sound vibrations of tuning forks can be used to clear the blockages that are impeding the body's flow of energy," writes one practitioner. "The forks work in a similar manner to acupuncture, only without the use of needles. When the correct tuning fork is placed next to the organ or chakra that is out of harmony, that area will raise its vibration or 'pitch' to that of the fork by the process of entrainment. Instead of masking the symptoms of the diseased organ with harmful drugs, or removing it from the body, we are able correct the organs rate of vibration with sound waves."

Another practitioner claims to be using the Acutronics system of sound healing, which is described as a "System of vibrational sound healing rooted in Oriental Medicine and philosophy that utilizes tuning forks and symphonic gongs tuned to the planets, Tibetan bowls, bells, drums, and rattles. Connecting body, mind, and soul in the journey toward optimal health, harmonic attunement or at-one-ment with all things in the Universe. The integral way, undifferentiated wholeness, the essence of Tao."

A typical therapy session is based on the belief that tuning forks correspond in tone to the seven major energy centers of the body that allegedly run along the spine. For instance, the root chakra is said to resonate with the note of C, the second chakra with D, up to the crown chakra which resonates with B. The tuning fork is held over the place where a particular chakra is said to exist and struck in order to introduce the tone into that energy field. As this practitioner attempts to demonstrate, when stress or illness causes these energies to become disrupted or "mixed up" between the chakras, the fork is held over the "mixed up" chakra and struck in order to connect the tone to the energy. The energy is then dragged by the fork back to where it belongs and is dropped. It's called, "click, drag and drop" according to this particular practitioner. Other methods involve ringing the fork over a chakra and listening for "dissonance." 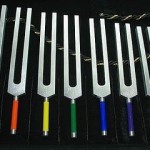 Practitioners claim to use intuition, intention and visualization to select appropriate sound healing frequencies, and therapy might include not only the forks but the human voice, Solfeggio tones and other tonal sounds or music.

As usual, there's no science to back any of this up in spite of the fact that every practitioner throws around phrases such as "science has discovered" and "on the cutting edge of science." The only research listed on these websites was conducted by other practitioners such as Dr. John Beaulieu, co-founder of BioSonics, a company that sells tuning forks.

The inventor of this hogwash is Daniel Hulse who says he went from a fundamentalist preacher to a developer of healing techniques using tuning forks. "I feel honored yet humbled to be among those rising to the call to facilitate the new 5th Dimensional energy coming into our third dimensional time/space continuum," he says in his book A Fork in the  Road.

David Hulse, D.D. (stands for Doctorate of Divinity which he received from the American Institute of Holistic Theology) is the developer of SomaEnergetics Energy Balancing Techniques which utilize Ancient Solfeggio Tuning Forks. He claims he created all this from "the deep metaphysical meanings found in the scriptures, the psychology of A Course In Miracles, and exploring the enlightened discoveries coming from new science about Light and Sound." [For those of you who do not know, A Course in Miracles was written by a woman who claimed to be channeling Jesus Christ.]

PM, you were wise to steer clear of this quackery and we're grateful to you for bringing this to our attention. We will all be keeping you in our prayers!