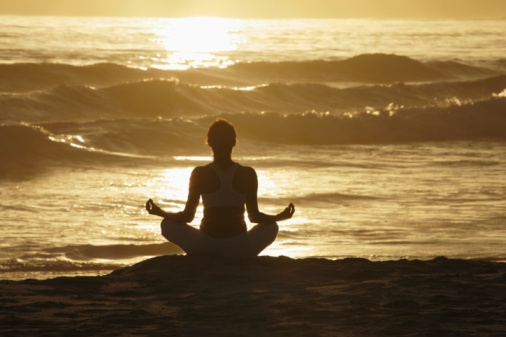 NOTE: This blog was reviewed and updated in May, 2020.

SA writes: "I am in a dilemma...I have spoken personally to my Parish Priest about my concerns about [Christian] Yoga taking place now 3 times a week in our community hall. Some parishioners attend the yoga sessions. I have prayed for about 3 years to see yoga removed, to no avail... I personally know the dangers of Yoga, having practised it for about 3 years, but have renounced and confessed my taking part in yoga. Nobody seems to be bothered... Can you please give me some guidance, I do not know what to do now..." This is a problem that only seems to get worse over time. The New Age movement is making its greatest advances into our faith on the backs of people who think they can Christianize fitness programs such as yoga and tai chi and thereby render them harmless.

Think about it - if this was possible, why couldn't we just Christianize occult practices such as tarot cards and palm reading? How hard would it be to create a Christian deck of tarot cards and associate biblical prophecies with each one? And couldn't we justify palm reading by saying that God created our bodies so when we read our palms, we're just reading what God put there?

I know it sounds silly, but what's the difference between this and what people are doing when they attempt to Christianize a Hindu practice?  And yet they're doing it everywhere, and getting away with it! This is in spite of a clear warning from Almighty God in Deuteronomy 12:31 not to worship Him the way pagans worship their gods. "You shall not worship the Lord, your God, that way..."

The bottom line is simple - what these people are doing is engaging in syncretism.

Syncretism is the attempt to reconcile or merge opposing philosophies or principles and is a hallmark of the New Age Movement. This is why you see retreat centers offering tai chi and yoga alongside Catholic prayer and the Mass. Syncretists believe all religions are equal, and convincing us of this is a crucial step toward ushering in One World Religion, a major goal of the New Age Movement.

Unfortunately, this plan is achieving success because of a general lack of knowledge about yoga and Christianity which results in a hopeless blurring of the lines.

Everyone who participates in yoga, especially here in the West, needs to understand that the physical exercises of yoga are only one of eight limbs of this practice, none of which are designed to be isolated from the others. Yoga is all one big package designed to achieve "Kaivalya" (ultimate freedom) by releasing the soul from the chains of cause and effect (karma) which tie the person to continual reincarnation. Yoga employs physical postures (asanas) along with the seven other limbs - moral restraint, religious observance, breath control (pranayama), sense withdrawal, concentration, meditative absorption and enlightenment (Samadhi) to achieve this goal. This complex ancient science of self-purification and development is all aimed at yoking the practitioner to the Hindu God known as Brahman.

But what has happened here in the largely Christian West is that people wanting to cash in on the yoga-craze either to fill their pockets or their pews (or both) have fallen into the trap of thinking they can simply substitute Christian teachings for these Hindu concepts and thereby render them Christian. Unfortunately, it's not that simple and major mistakes have been made by some of the leading proponents of Catholic or Christian yoga.

Elliot Miller, research specialist in Eastern religions for the Christian Research Institute, lists several major contributors to the field of Christian yoga in the U.S., all of which base their teachings on flawed understandings of either yoga, Christianity, or both.

The most influential is Nancy Roth, author of An Invitation to Christian Yoga (Seabury Books, 1989) and an Episcopal priest with "an ecumenical ministry in spirituality" Roth claims she would use the relaxation and visualization time at the end of class to focus on Jesus even though the class was chanting "om" and all their exercises had Hindu names.

Eventually, she came to the realization that "there needed to be a new Christian asceticism that respected the integration of body and mind and reflected both the newest research in psychology and physiology and the wisdom of other, even more ancient spiritual traditions." Christian yoga was her answer to this problem.

As Miller writes: "Roth's words appear to reflect an inclusivist theology that is common in mainline churches such as the Episcopal church. Inclusivism holds that salvation is through Jesus Christ alone, but Christ's salvation can extend even to those who do not consciously believe in Him, imparting to them gifts of grace or spiritual riches that can benefit those of other faiths, including Christians."

As a result, "Roth's interfaith exploration and synthesis of East and West laid the conceptual and practical foundations for Christian yoga, and the marks of her influence are evident throughout the movement," Miller writes.

Two more recent authors who admit to being influenced by Roth's work are Susan Bordenkircher (Yoga for Christians, 2006) and Brooke Boon (Holy Yoga, 2007). Both of these writers believe yoga can be redeemed and made into a holy practice to the Lord, even without a major revamping of yoga, Miller writes.

However, as Miller points out, "Adding Christ into the equation does not make the pursuit of self-knowledge in "Holy Yoga" any more of a Christian practice than adding sprouts to a greasy hamburger makes it health food."

This is exactly the same error made by those who think they can "Christianize" the concept of a universal life force energy (chi, qi, ki, prana) simply by calling it the Holy Spirit. We can no more call chi the Holy Spirit than we can call a dog a cat. Why not? Because you can't change the nature of something just by changing its name. Chi will always be chi, a dog will always be a dog, and yoga will always be yoga, no matter what you call it.

Profound errors are also found in Bordenkircher's work. For instance, she does an awkward job of "Christianizing" the Hindu concept of bodymind (the idea that the body and mind are a single entity) a pantheistic belief that has no basis in Christianity.

"Because of this teaching, not only are the postures of yoga created for the end result of mind control, but it is also believed that the mind or soul cannot reach its potential if the body is beset with weakness," Miller explains.

This non-Christian concept is found in the Christian yoga espoused by Bordenkircher. She writes "As your range of motion decreases, your ability and desire to do certain tasks will likely be affected. Your attitude may be negatively affected . . . your relationships may even suffer as you struggle with self-image and esteem."

Even though the Bible does teach that our bodies are the temples of the Holy Spirit and that they must be kept healthy in order for us to follow the Lord more effectively, "it is not true, however, that our moral decisions are determined by our bodily condition or that Christian sanctification flows from, or depends on, a sound body," Miller points out.

These are just some of the flaws Miller uncovered in these works which are fueling the "Catholic" and"Christian" yoga craze in the U.S. Notice how subtle these errors are. One needs a theologian to point them out. And many of them - such as our pastors - don't catch them either!  So how can we expect the "average Joe" in a yoga class to understand all this?

My advice to anyone who has a problem with yoga showing up in their parishes or schools is to attempt to educate the parties responsible about yoga. I have written a quick read on this subject (see the New Age Resources on the navigation bar above) that was designed to be used for exactly this purpose. Make sure these efforts are backed by continual and persevering prayer. Pray until the situation is resolved - even if that means praying until the day you die.

This article by Elliot Miller may also prove helpful, particularly to pastors: http://www.equip.org/articles/yoga-exercises-and-christianity

This article gives an easy-to-remember acronym to the false teaching that yoga can be Chritianized: http://www.equip.org/hank_speaks_outs/how-should-christians-respond-to-yoga