CL writes: "A couple of people I know are considering a session with a gentleman (Yefim Shubentsov) known as the 'Mad Russian' (hypnotist?) in Brookline, MA to help quit smoking (bioenergetics?).  I wanted to know how this stands in the eyes of the Catholic Church." 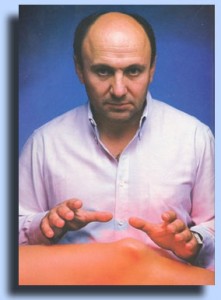 First of all, "bioenergetic" medicine is based on the belief that all humans possess a form of vital life energy, a type of energy for which there is no scientific evidence. This means any treatment based on this premise is essentially worthless. Even though these so-called energy healers can produce droves of testimonials from people claiming to have been healed, it never gets beyond the placebo effect. As for the "Mad Russian," he's just another energy healer (except his name is a lot harder to pronounce). Yefim Shubentsov was a professional artist in his native Russia who became an energy healer in the mid-1970's when an acquaintance approached him on the street and told him, "You have a very strong energy field; I can feel it." According to an article appearing on CBSMoneywatch.com the man handed him a business card with an address on the back and asked him to visit, saying "I promise you an interesting life." Shubentsov was skeptical at first, but curiosity eventually got the better of him and he went. When he arrived at the address listed on the card, it was a laboratory where people were studying "biological energy" which is known as qi, chi, prana, life energy, etc. Shubentsov was told that he had a heightened energy field and that they could help him develop his talent. He went on to learn how to use his energy to heal diseased plants, sick animals, and eventually people. Eventually, he became so adept at this healing that he was asked to work in a Moscow hospital where he claims to have healed a woman who was dying of heart failure. This event proved to be life changing and he decided to give up his artistic career to pursue a life dedicated to healing others. He immigrated to the U.S. 20 years ago and is said to have helped 100,000 people overcome a variety of addictions. He currently treats about 500 people a month out of his office in Brookline, Massachusetts. From what I've read, a typical treatment involves a long talk in which he gives basically common sense advice to his patients. The actual treatment consists of him  wriggling, flicking or combing his fingers in the air in front of the patient. According to the CBS article, he calls himself an eraser, capable of removing the mistakes in the energy fields that surround addicts. "Physically, I transform energy," Shubentsov says. "I correct it like it's supposed to be." He details his methods in his 1999 book, Cure Your Cravings, which he co-authored with Barbara Gordon. Shubentsov claims he's not using any mystical, New Age, religious or "magical" powers or hypnosis (sure fooled me) even though the life force energy he claims to be manipulating is about as New Age as it gets. As usual, there are tons of testimonials in support of Shubentsov floating around in cyberspace, along with many who claim they were ripped off for the $65 visit. The only research into Shubentsov seems to have come from a Dr. Douglas Powell from Harvard University Health Services who apparently investigated a handful of Shubentsov's clients and determined that his methods worked, but he couldn't explain why. This rather ambiguous statement is about all I could find as far as research into Shubentsov, which is not good for those who wish to use this as evidence that the Mad Russian is for real. Without any substantive information about Powell's study and how it was conducted, coupled with the absence of any corroborating research, it's safe to say Shubentsov's energy healing techniques are achieving the same results as all the others, namely placebo. Incidentally, I once had a pack-a-day smoking habit and tried everything to quit - the patch, hypnosis, Nicorette gum. At one time, I was actually doing them all at the same time PLUS smoking. Nothing worked until one day I turned to Jesus, specifically, the Chaplet of Divine Mercy, and began to pray this chaplet as often as I could every day with the express purpose of imploring God's help in kicking the habit by giving the boot to whatever demons might be behind my addiction. The longer I prayed, the less I wanted a cigarette. Within a month, I had quit completely. That was 18 years ago and I haven't had a cigarette since.  I guess the moral of this story is - who needs hocus pocus when you can have the real thing? Send your New Age question to newage@womenofgrace.com