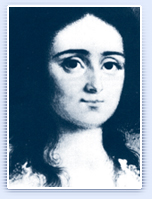 Born Elizabeth Ann Bayley in New York City, Mother Seton is a saint of firsts: first American-born saint, leader of the first Catholic girls' school (and the first free Catholic school of any kind) in the United States, and foundress of the first American order of religious sisters -- the Sisters of Charity. 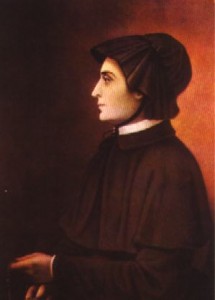 ew York no longer hospitable to her Catholic zeal, Elizabeth suffered through some trying years before finding a haven in Baltimore.  I twas there that she channeled her passion for service into girls' education.  She also pursued her dream of religious life, fashioning a rudimentary habit in the style of nuns she had seen in Italy.  Other women were drawn to her, and in 1809 the Sisters of Charity was born, based on the example of St. Vincent de Paul.

Mother Seton died in 1821 in Emmitsburgh, Maryland, where her school still sands.  In her refusal to let the social pressures of her station restrain her witness to the Catholic Faith -- in word and deed -- she is a wonderful example for us in a secularizing world.