By Susan Brinkmann, OCDS Staff Journalist A fierce budget battle on the Hill ended at the eleventh hour on Friday night when pro-life lawmakers were forced to give up attempts to defund Planned Parenthood and ObamaCare in order to avoid a government shutdown. 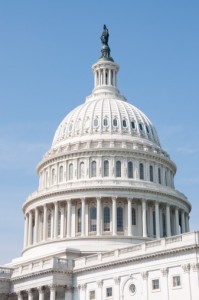 LifeSiteNews.com is reporting that pro-life lawmakers were unable to make pro-abortion forces in Congress blink on Friday night when both parties agreed to avert a government shutdown by passing a stopgap budget measure that included no riders except for one that will end taxpayer-funded abortions in the District of Columbia. The Planned Parenthood rider and another that would have stripped funds from ObamaCare were removed from the bill. As the deadline for passing the bill before a midnight deadline, pro-life lawmakers realized they were facing opponents who would rather shut down the government than defund the nation's largest abortion provider. “They were faced with a choice — they would either have to give in or shut down the government,” said one senior aide to Politico. They decided to give in - for now. After reaching the deal early Saturday morning, Congress quickly passed and sent a short-term spending bill to the White House that will keep the government running until the end of next week, allowing time to pass a long-term measure. The Obama administration’s fierce defense of Planned Parenthood was echoed by Sen. Majority Whip Chuck Schumer (D-N.Y.) at a Planned Parenthood rally Thursday. “The dangerous, ideological cuts to Planned Parenthood that passed the House are never, never, never going to pass the Senate,” said Schumer. “Let me repeat that, so all those who want to stomp on women’s health and women’s rights can hear us loud and clear. The dangerous, ideological cuts to Planned Parenthood that passed the House are never, never, never going to pass the Senate.” At first Democrats appeared equally willing to stonewall against defunding abortions in the District of Columbia, but late Friday night, negotiators were forced to back down on the local abortion funding.  In lieu of the Planned Parenthood rider, Carl Cameron of Fox News reports that Senate Democrats have agreed to allow a separate vote on the organization’s funding, as well as a vote to defund the health care reform law. The deal also reportedly mandates several audits of Obama administration policies. Speaker Boehner also won significant gains in cutting spending, with the administration agreeing to nearly $40 billion in cuts - a number the National Journal reported the administration conceded to as part of a deal to take Planned Parenthood off the table. Prolife groups are vowing to fight on. "Contrary to assertions made by Senate Majority Leader Harry Reid and Senate Democrats, no family planning funds were ever threatened during this most recent budget debate," said Family Research Council president Tony Perkins. "The proposed language simply says that if you provide abortions you can't get federal monies. In troubled economic times, taxpayers should not be subsidizing organizations that perform abortions. The money would much better serve recipients who do not have abortion as their central 'product.' "We will continue to press Congress to adopt a 2012 budget that reflects the beliefs of most Americans who may disagree over abortion but broadly agree that they do not want their hard earned money going to abortion organizations." © All Rights Reserved, Living His Life Abundantly®/Women of Grace®  http://www.womenofgrace.com