Commentary by Susan Brinkmann, OCDS Staff Journalist In spite of the extensive coverage given whenever an act of violence is perpetrated against an abortion clinic, when an unknown assailant threw a Molotov cocktail at an elderly woman who was part of a 40 Days for Life protest last week in Kalispell, Montana, not even the local police paid much attention. 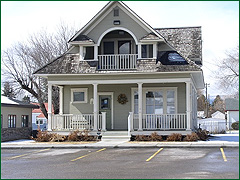 According to the Thomas More Society (TMS), a public interest law firm, they had to file a formal complaint with the Federal Bureau of Investigation in Helena, Montana to demand an intensive investigation of a fire-bombing attack on a pro-lifer that occurred on March 17 at an abortion center in Kalispell (shown at right). Karen Trierweiler, coordinator of the 40 Days prayer vigils in Kalispell, said that a homemade incendiary device was thrown at one of the vigil participants, an elderly retired woman, by an assailant - as yet unidentified - as she walked on the public sidewalk near the abortion provider's premises. The victim did not see the bomb-thrower, nor did she see the bomb - akin to a "Molotov cocktail" - before it exploded on the sidewalk behind her, making a loud popping noise like a big firecracker as it burst into flame. Apparently the victim was unhurt. Regaining her composure, the victim called Ms. Trierweiler to the scene, and she called the police. After a lengthy delay, a Kalispell police officer arrived. But instead of inspecting the bomb debris or calling evidence technicians to the scene, the officer remarked that police could never get prints or other evidence from the bomb's remains, and that he would call the city's garbage service to dispose of all the debris. Then he said that the 40 Days prayer vigil participants should expect this kind of reaction if they're out there protesting. Questioning Officer Hoover's assessment of the attack, Ms. Trierweiler called the Kalispell desk sergeant to complain, where she was unable to get further assistance. Tom Brejcha, TMS president and chief counsel, said, "We are appalled by this terrible act of violence, while we're immensely grateful that God's grace spared this valiant pro-lifer any serious injury. But the reaction of Kalispell police officers after Ms. Trierweiler called them to the scene was equally appalling, indeed outrageous. "We intend to file disciplinary complaints against both the officer who came to the crime scene and the desk sergeant whose tepid, indifferent, and grossly unprofessional response to this blatant act of domestic terrorism shows them both unfit to wear a police uniform and at best deserving of severe disciplinary action. We expect much better from the FBI and we will pursue the matter to the very highest levels of the U.S. Department of Justice if this case is not investigated promptly and vigorously and -- once the assailant is identified and apprehended -- prosecuted to the hilt," Brejcha concluded. Ms. Trierweiler also reported that an eyewitness has stepped forward, who was not part of the 40 Days campaign but rather a passerby, who saw the incident occur and who may be able to help the FBI track down the bomb thrower and bring him to justice. © All Rights Reserved, Living His Life Abundantly®/Women of Grace®  http://www.womenofgrace.com