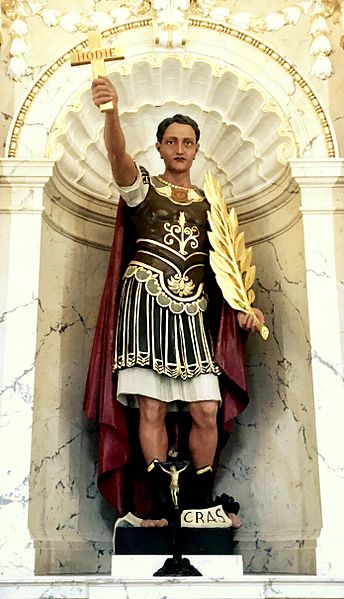 LB writes: “Is praying a novena to this saint okay? I’ve read different things about leaving an offering of pound cake and that some people that practice voodoo pray to this saint. So that concerns me and I don’t want to invite the wrong things into my life. I know he has a huge following in Brazil, but given that I’ve read different things about this saint, I wanted to be sure. Is he not considered a true saint because there is no historical record of an actual date of death? Please advise.”

St. Expedite is not an authentic saint of the Catholic Church, but his origins are not New Age or occult in spite of the fact that people who practice voodoo or make superstitious offerings of pound cake like to pray to him.

In this YouTube video, Father Dan Cambra MIC of the Marians of the Immaculate Conception, refers to St. Expedite is "an intriguing little piece of American Catholic history” and tells the story of how he came to be associated with the Ursuline Sisters of New Orleans.

Apparently, shortly before the French Revolution, the sisters received a crate from France that contained a beautiful statue of a Roman soldier carrying a palm branch in one hand and a cross in the other with a black crow at his feet. There was no documentation with the statue, only the words “EXPEDITE” written on the crate, leaving the sisters with no idea who the statue was representing.

They tried to solve the mystery by contacting their local bishop but he was unable to help them. They also wrote to the person who sent the statue but by this time, the revolution had begun and it is unknown if the letter ever reached the source of the statue – only that no reply was ever received by the sisters.

Half-jokingly, they put the statue in the hallway of their school and called him St. Expedite. The students began to pray to him and even created an expedited novena of nine-hours rather than the customary nine-days.

“As it turned out, there must have been some answered prayers, because devotion to St. Expedite grew among the student population,” Father Dan explained.

As the students graduated, married, or entered religious, devotion continued to grow within the city of New Orleans, and spread from there.

However, there was a saint known as Expeditus who died in AD 303 who is believed to have been a Roman centurion who converted to Christianity and was beheaded during the Diocletion persecution.. St. Expeditus is depicted in much the same way as St. Expedite - holding a palm branch – which is the symbol of martyrdom – as well as a cross with the word hodie (Latin for today) inscribed across it. At his feet sits a black crow that holds a banner with the word cras (Latin for tomorrow) written on it.

Legend has it that the day Expeditus decided to become a saint, the devil appeared to him as a crow and tried to convince him to wait until the next day. The saint angrily stomped on the crow and declared, “I’ll be a Christian today!”

CatholicSaints.info lists St. Expeditus among a group of Armenian martyrs “of an uncertain period” who are believed to have been martyred on the same day. Although the actual date is unknown, their feast of their martyrdom is celebrated on April 19.

While we don't know exactly who St. Expedite is, we do know that this statue bears an uncanny resemblance to St. Expeditus.

Regardless of who it might be, the statue obviously represents some saint in heaven who was once a Roman soldier and who suffered martyrdom for Jesus Christ.

And whoever it is, he evidently answers prayers.