A couple posing as Jesus Christ and Mary Magdalene have set up a camp in Queensland, Australia and are attracting dozens of followers from around the country. 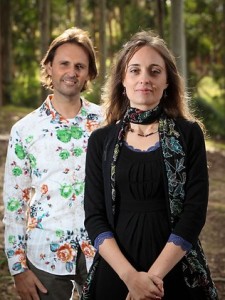 The CourierMail.com.au is reporting that Alan John Miller, 47, and Mary Suzanne Luck, 32, who operate under the name "Divine Truth," claim to be the second coming of Jesus and Mary Magdalene. "Just a little over 2000 years ago, we arrived on the Earth for the first time," Miller says on his website. "Because of my personal desire and passion for God, as I grew, I recognized not only that I was the Messiah that was foretold by ancient prophets, but also that I was in a process designed by God that all humans could follow, if they so desired." The Australian-born Miller claims to have two children by a previous marriage, which he says ended after he "began to remember details" of his past life.   He also claims that his sidekick, Luck, is Mary Magdalene, who was once married to Jesus. As bizarre as it sounds, Miller has drawn anywhere from 30 to 40 disciples to the Wilkesdale area of Queensland. He and his followers raised $400,000 to buy the property where they hold weekly meetings and are planning to build a center for international visitors. The Courier is also reporting that police have been called to the site to investigate screams, only to discover that they were part of a healing exercise where members shout in order to help process "past soul damage." Relatives and friends of Miller's followers have contacted the Cult Awareness and Information Centre to warn about the cult and to express their concern after loved ones sold their houses and moved to Wilkesdale. "The moment someone becomes God or God's voice on Earth, it gives them another level of authority to enforce submission to them," Cult Awareness and Information Centre spokeswoman Helen Pomery told the Courier. Anglican and Catholic church leaders are also concerned about the cult which attracts the vulnerable. They have urged people to be very cautious when exploring new religious movements. "This is especially true for people who are seeking meaning in their lives and as a result may be vulnerable," said Dr Philip Aspinall, an Anglican Archbishop. Check out these numerous YouTube videos of Miller giving workshops where he talks about channeling and how the Law of Attraction has brought him a lot of criticism. In one video he says: "There's probably a million people who say they're Jesus and most of them are in asylums. But one of us has to be. How do I know I am? Because I remember everything about my life." We can only pray for the poor souls involved in this cult - including Miller and Luck - that their search will lead them to the One True God, our Lord and Savior Jesus Christ.