One of our readers was kind enough to send us an e-mail she received which offered her an opportunity to invite three "angels" into her life for five days. Believe it or not, people are actually falling for this and going through all the prescribed rituals to allow these unnamed spirits into their lives! 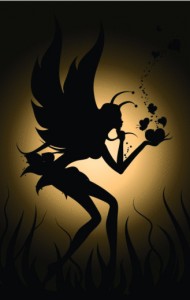 These so-called angels are referred to as The Gift, which derived from a German medium named Irma who claims they were channeled to her after she watched the movie, "Pay It Forward." This movie was about a troubled 11 year-old boy named Trevor (Haley Joel Osment) whose teacher (Kevin Spacey) asks him to come up with a practical way to make the world better and to put it into action. Trevor comes up with the notion of Pay It Forward, which is to do a favor for three people without being asked, then ask them to do the same for three others. Irma apparently decided that sending occult spirits to her friends would make the world a better place. Calling them "angels," she claims they can help recipients "take part in raising the consciousness of the planet by beginning with your innermost sacred desires." These "angels" can also help to accelerate the recipient's "personal growth and awareness" and will help with any "project/evolution" needed during the five day period. At the end of this time, they are to send the "angels" to three others. A small ceremony must take place to welcome the "angels" which consists of setting up a special place in the home to erect a shrine. This altar must contain a white candle which the recipient has blessed, a white flower, three prayer requests written down and put in an envelope, with an apple (yes, an apple) placed on top of the envelope. "Before you greet the Angels, light the candle and tend to it while the Angels stay with you," the e-mail reads. "If the candle should finish, start a new one. Keep a white candle burning while they are with you. You can put it out when you are not home and re-light or light another one when you return; just bless it again. At the agreed time (when I release the Angels to you) you open the door (literally) and welcome the Angels by saying: "Welcome Angels that have been sent to me. Please, come in! Thank you for coming here and blessing all the people that I come in contact with and that enter my home. Thank you for choosing me and my loved ones to spread the blessings of joy, love, wisdom and accelerated growth and evolution. Thank you for assisting me and manifesting my three prayers that lay on my heart." On the day the "angels" leave, the recipient is to open the door and send them off  to the three people chosen to receive them, who in turn open their door and welcome them at the same time. The e-mail includes a kind of testimony from the "angels" in which they claim to desire only to "grace everyone's lives with a taste of Divine love, grace and the blessings of God." They go on to describe their "energy" as subtle, gentle and powerful. "It seeks the low places like water to nurture, correct and allow healing energy to grow." They claim to be non-judgmental spirits who are only interested in helping people. "So enjoy and relax. Take in our love. Do not be afraid of any piles of dust in the corners of your house, your psyche or your soul. We will lovingly help you clean them up." Calling themselves the "wash maidens of the earth", they claim they want to be respectful of our "Divine nature" and only come into people's homes in order to "let grace have a face." "We love co-creating the world you want to create. The energy of your desires and needs comes from you but we often provide the horsepower to give you the edge energetically to make it happen with more ease and grace. Our work is as simple as this." First of all, there's no such thing as a helping angel who is at the beck and call of human beings. Angels do not respond to the command of mediums; they are pure spirits who are at the command of God alone. "Christ is the center of the angelic world. They are his angels: 'When the Son of man comes in his glory, and all the angels with him. They belong to him because they were created through and for him: 'for in him all things were created in heaven and on earth, visible and invisible, whether thrones or dominions or principalities or authorities - all things were created through him and for him.' They belong to him still more because he has made them messengers of his saving plan: 'Are they not all ministering spirits sent forth to serve, for the sake of those who are to obtain salvation?'" (Catechism No. 331) You can be sure that whoever - or whatever - Irma is sending around are not angels of God. Anyone who invites them into their home does so at their own risk.