By Susan Brinkmann, OCDS Staff Journalist From the moment he landed in one of Europe's most secular nations, Pope Benedict XVI took on secularism in Spain, encouraging a massive throng of nearly one million youth from 190 countries to build their lives "on the firm foundation" of the Christian faith. 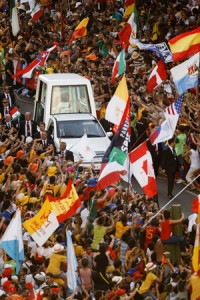 The DPA is reporting that the pope made an unforgettable entrance into the city of Madrid yesterday where hundreds of thousands of young people greeted him with thunderous cheers, flags and confetti as the Popemobile drove toward Cibeles square in the center of the city. Once there, the pope made a symbolic entrance into Madrid on foot through the 18th century Alcala gate, accompanied by 50 young people from five continents. "There are many who, creating their own gods, believe they need no roots or foundations other than themselves," the pope said while standing under a large white umbrella in the shadow of a large image of the Blessed Mother holding Jesus. He warned that such "temptations" lead to "something so evanescent, like an existence with no horizons, a liberty without God." He stressed the faith as a solid foundation for life in contrast to those "who are content to follow fashionable ideas" and "take shelter in the here and now." The pope did nothing to temper his remarks even upon his arrival at Madrid airport earlier in the day when he was greeted by Spain's socialist Prime Minister Jose Luis Rodriquez Zapatero. The prime minister and his government has been at odds with the Vatican over their aggressive push for social reforms such as same-sex marriage and easier access to abortion and divorce. Emphasizing Spain's high unemployment rate where almost 40 percent of Spanish youth are unable to find work, the pope was not afraid to point out the failures of secularism. Young Catholics see "the prevailing superficiality, consumerism and hedonism, the widespread banalization of sexuality, the lack of solidarity, the corruption," Benedict said. In spite of the massive show of support for the pope and the Church, the visit is not without controversy. An estimated 5,000 people belonging to secularist, alternative Christian, leftist, feminist and other groups marched in central Madrid, demanding a full separation between church and state. Even though police prevented them from clashing with pilgrims, violence did break out between demonstrators and police that left 11 people injured and eight detained. At the same time, a judge released a Mexican chemistry student who was suspected of planning a gas attack against Wednesday's demonstration. Jose Alvano Perez Bautista said that his internet messages announcing such plans had been a joke. He was freed on condition that he report to police twice a day during his stay in Spain. The pope's visit to Madrid is his 21st trip abroad since he was elected pontiff in 2005, and his third to Spain. © All Rights Reserved, Living His Life Abundantly®/Women of Grace®  http://www.womenofgrace.com Photo of Pope Benedict XVI entering Madrid on Thursday is by Daniel Ochoa de Olza of the Associated Press.