By Susan Brinkmann, OCDS Staff Journalist Rachel Maddow, a controversial lesbian talk-show host at MSNBC has been served with a multi-million dollar lawsuit alleging defamation for comments she made about a Christian ministry. 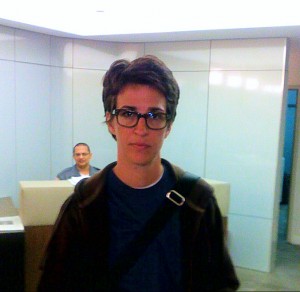 WorldNetDaily.com (WYD) is reporting that Maddow was served late Monday evening at her condominium in New York's Soho neighborhood where a server provided a photo of her at the time the papers were delivered (see photo at right). The suit is being brought by Bradlee Dean of the YouCanRunButYouCannotHideInternational (YCR) ministry who claims Maddow falsely broadcast that he advocated the execution of homosexuals. According to the complaint, the false characterization started with reporter Andy Birkey of the Minnesota Independent, a secularist and gay activist.  In May 2010, Birkey apparently wrote an article titled "GOP-linked punk rock ministry says executing gays is 'moral'," based on a statement Dean once made on the radio criticizing fellow Christians for not taking a stronger stand against "gay" rights lobbying in schools. He said Muslims took the issue more seriously, referring to Islamic law where homosexuality is treated as a crime, sometimes punishable by death. But Dean's comment in no way condoned these Muslim practices. Because presidential candidate Michelle Bachman once praised Dean's mission, Birkey, Maddow, NBC and MSNBC allegedly acted in concert to use Dean's comments as a way of making Bachman look like she supported extremists.  Despite a statement by Dean on his ministry's website and elsewhere that he was not calling for the execution of homosexuals, the claim explained, "MSNBC's Rachel Maddow and others seized on and accused Dean on her show of supporting the killing of homosexuals, as is the practice in some radical Islamic countries. This seriously has harmed Dean and the ministry, who pride themselves on respect and love for all people." The complaint said Maddow "outrageously disparaged Bradlee Dean's physical appearance, his first name and his profession as a heavy metal entertainer and his standing in the community and represented that he and YCR had advocated the execution of gays." As a result of her false reporting, other news outlets picked up the false accusation, with outlets such as The Minneapolis Star-Tribune saying Dean's comments were read as "advocating executions for gay people." The City Pages said Dean "has praised religious extremists who execute suspected homosexuals." Even ABC is broadcasting the false allegation, accusing Dean of suggesting that "homosexuals be executed." As a result, Dean has had death threats and is now seeking $50 million in damages.  Larry Klayman, founder of Judicial Watch and Freedom Watch, who is representing Dean, said money is not the issue. "This case is filed as a matter of principle," he said. "We need more Bradlee Deans in the world and hateful left wing television commentators must be made to respect not only his mission but the law." Dean's ministry, which has reached more than 500,000 young people with a message of truth and hope, focuses on basic constitutional issues. He speaks at a variety of venues, such as churches, festivals, prisons, detention centers and on radio and television programs. © All Rights Reserved, Living His Life Abundantly®/Women of Grace®  http://www.womenofgrace.com