DJV writes: "I received a 10" Gazing Globe as gift. This gazing globe is hand blown glass and is to be set outside to look at. When I typed in gazing globe new age movement in my search engine, many articles came up about evil practices and gazing globes. Is this a new age product? If so, do I return it to the store for a refund or do I destroy it so no one else buys it? On Catholic radio the other night, the host told a caller in her question of whether to donate books that she found to be evil or to destroy them, the host said to destroy them. I really appreciate your answer." 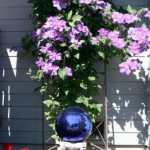 You may be mistaking the garden-variety gazing globe for a crystal gazing globe which is the kind used in the occult for divination purposes. From the sounds of your description, you received a gazing globe for use in a garden. These originated in 13th century Europe where people would keep them in their homes to ward off evil. One of the legends I came across says the globes were at first limited to outside use to keep witches away - the theory being that a witch cannot tear herself away from her own image and would be prevented from coming inside by her own reflection. They had many names throughout the ages, such as spirit balls, witch balls, friendship balls, butler balls and spirit catchers. These outdoor globes became very popular in Victorian England, beginning with King Ludwig II of Bavaria who used them throughout the gardens at his castle. Globes became all the rage in Europe at that time, and even in the U.S. where they were widely used in gardens. An indoor variety, known as a butler ball, was placed on a pedestal outside the dining room so that servants could see into the room without interrupting them and determine who needed service. 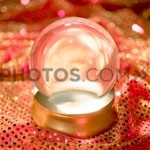 However, crystal gazing balls are an entirely different story. They are used for scrying - which is an occult art of divination through the use of reflective surfaces of some kind, such as water, mirrors or crystal.  Psychics claim to receive visions while gazing upon these surfaces through a kind of trance induction. Some practitioners believe they are receiving visionary experiences of super- or preternatural insght while others say their visions arise from the subconscious mind. Scrying is most commonly done with a crystal ball, but it is also done with any smooth surface, such as a bowl of water or a pond. The Catechism condemns any and all kinds of divination, including that of scrying. (See No. 2116-2117) If you received a crystal gazing ball, you should definitely destroy it. However, you don't need to take such drastic action with a garden-variety gazing ball. If you are sensitive to the fact that they were created for superstitious purposes, you may choose not to use it, but it's not necessary to destroy it.