Most people think it could never happen to them. They're too educated, too savvy, too world-wise to be swept into a cult. But that's not what the statistics show. 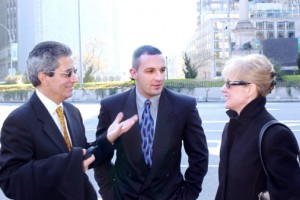 Research has found that cult members are not “crazy people” but are very much like the rest of us.  What makes a person a potential cult victim is not their personality type as much as where they're at in life. There are certain times when people are more vulnerable than others to the lure of a cult. These times include: 1) the loss of status, a job, or certainty about one's identity, such as when we go from being a graduating high school senior to a first year college student. 2) the loss of an important relationship either through death or a break-up 3) the loss of our dreams or ideals, such as when we experience an event such as bankruptcy and loss of property, the failure to achieve a life-long pursuit. Times such as these make us vulnerable to people who promise us a new life, a new sense of belonging. This is especially true for people who are naturally dependent on others, who tend to be overly-trusting, have a tendency toward low self-esteem, or who are disillusioned with their religion and are searching for new spiritual meaning in their lives. The young are particularly vulnerable to cults because they're living in a time of flux, trying to decide what to do with their lives and even enjoying the adventure of searching for answers in new places. However, older people also fall victim, most notably through "white-collar cults" which are usually presented as large group motivation and/or corporate training  programs. But the type of person we are, or the circumstances in our lives, aren't the only reason why just about anyone can fall into cult. These operations are run by smooth operators who are masters at manipulation and deception and who use a variety of tactics to ensnare the unwary. For instance, a method that particularly frightens me is the use of front groups that allow a cult to operate behind the scenes until they're ready to expose themselves. Front groups can be instructional classes, study groups, Bible groups, social clubs, management or job-related seminars, neighborhood associations, meditation or yoga classes, psychotherapy clinics and political clubs.  Generally speaking, when a person goes to the first few events, there is no indication of any connection to a cult. They become comfortable, get to know the people, make friends, which is all designed to win over a person's trust before beginning the process of introducing the cult which has been thus far been lurking in the background. Think about it. How easy is it to go to a Bible study group where one of the leaders introduces you to, say,  a new way of meditating, usually a type that requires some kind of mind-blanking. I know people who swear by this kind of "prayer," having no idea that this is one of the most typically used methods of mind control by cults! In a book entitled Cults in Our Midst by Margaret Thaler Singer, clinical psychologist and emeritus adjunct professor at the University of California, Berkley,  she recounts the details of an experiment she participated in with a former cult member who had been a highly successful street recruiter. The object was to get a stranger on the street to agree to come to a meeting, dinner, or lecture, which was affiliated with a cult. The two deliberately targeted non-students, such as people in the over-thirty crowd -  businessmen and women, professors -  just to see how the so-called "sophisticated" and well-educated would respond to her sales pitch. Dr. Singer was amazed at how this recruiter was able to get even these seemingly world-wise people to agree to come to her fictitious "meeting." It was only after they had agreed to come that they would reveal how it was all just an experiment to see how easy it was to lure someone into a cult. The people she "captured" were always astonished. "But I believed you!" they would exclaim. "You seem like such a nice person. You couldn't have been in a cult!" They would often ask her how she knew certain things about them, such as how they might be interested in joining a "peace" group  or some other type of lecture. The former cult member would then expose all the clues the person had revealed during the course of the conversation that led her to know exactly what buttons to push to get them to come to her meeting. In almost every case, the potential victim admitted that they never would have thought a cult could operate so smoothly and with such class and sophistication. They were under the false impression that cults used threats about sin or promises of enlightenment to lure the vulnerable.  And absolutely none of them ever thought they could fall for a cult! It's never too late to educate yourself in the workings of cults. In Friday's blog, I'll publish a checklist of typical warning signs of a cult to help you discern whether a group is okay, or if it could lead you places you don't want to go. Send your New Age questions to newage@womenofgrace.com