The following breaking news report is one of the main reasons why consumers need to be very careful when choosing a hypnotherapist. The Sun Journal is reporting that a 38 year-old man claiming to be a certified clinical hypnotherapist was sentenced on Monday to six years behind bars for using hypnosis to 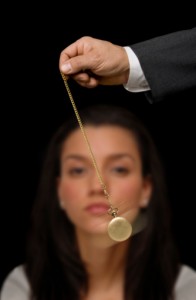 make a young female client feel "more comfortable" about his sexual advances. Aaron Patton of the city of Jay, Maine, who classifies himself as a hypnotist and an actor, was convicted of sexually molesting a female client who first came to him at the age of 12 for help in curing a nail-biting habit. Now 17 years-old, the girl said the abuse started out as fondling, then progressed to having sex with her in an adjacent bedroom. After each encounter, he would hypnotize her in an effort to make her feel more comfortable with what they had done. Patton claimed that the girl was 16 at the time, which is considered the legal age in Maine. He insisted that he uses his skills as a hypnotist for behavior modification, not mind control. However, when police searched his apartment, they found lingerie he had bought for the girl along with sex aids and a copy of "Sex and Hypnosis." During testimony, the jury believed the teen's assertion that the sex was not consensual, saying that she gave her account with "vivid clarity" and was seen to "wince" when describing her  sexual encounters with Patton. Her attorney, Nicholas Worden, also pointed out that Patton kept the relationship a secret for years, which is further proof that he knew what he was doing was wrong. After the verdicts, Worden said: “The jury did its job, what it was instructed to do. Most importantly, the jurors held the defendant accountable. I think that speaks to justice.” The openness to suggestion and subsequent behavioral implications of hypnosis has proven to be an irresistible temptation to a variety of charlatans for many years. Unlike its legitimate medical uses, hypnosis can be very damaging when used improperly such as in the Patton case as well as by those who use it as a stage show. In fact, use of hypnosis as entertainment has been banned in several nations because of the danger of adverse posthypnotic reactions. This is why the Catholic Church has warned – but not condemned - the use of hypnotism by the faithful. According to a June 2, 1840 Vatican document, “She has condemned only abuses, leaving the way free for scientific research. ‘The use of magnetism, that is to say, the mere act of employing physical means otherwise permissible, is not morally forbidden, provided that it does not tend to an illicit end or one which may be in any manner evil.’” Because hypnosis is not regulated in most states, consumers should select a licensed (not certified as Patton claims to be) hypnotherapist, which is a person who has medical, psychological, dental or other professional health care training. The American Society of Clinical Hypnosis explains: “A lay hypnotherapist may be certified and claim to have received 200 or more hours of training, but licensed health care professionals typically have seven to nine years of university coursework, plus additional supervised training in internship and residency programs. Their hypnosis training is in addition to their medical psychological, dental or social work training. Careful questioning can help you avoid a lay hypnotist who may engage in fraudulent or unethical practices." [emphasis added] A potential hypnotherapist should be asked if they are licensed, rather than just certified, by the state in which they are practicing. If they are not legitimately licensed, they probably lack the education required for licensure. The next question would be to ask what their degree is in. If it’s in hypnosis or hypnotherapy, rather than a state-recognized health care profession, the person is a lay hypnotist. There are only two nationally recognized organizations for licensed health care professionals using hypnosis in the U.S.: the American Society of Clinical Hypnosis and the Society for Clinical and Experimental Hypnosis. To find a qualified hypnotist near you, visit their websites at http://asch.net/referrals.asp or http://www.sceh.us/referrals.html.