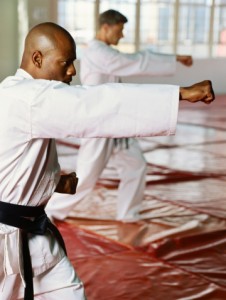 Kenpo is a Japanese martial art which means, literally, "Fist Law." It's an unarmed fighting art that developed centuries ago and became one of many types of karate (which means "empty hand" in Japanese). Martial art forms are never just about fighting. They all have a spiritual component and the question is whether or not that component is stressed, downplayed or left out altogether. For instance, the Way of Kenpo, which is rooted in Taoism, is described as being "that state where the mind/spirit and body are united as a single element we call the Spirit of Kenpo." It includes the principles laid down by Miyomoto Musashi (known as the Kensei or "sword saint" of Japan) who said these must be set in the heart: 1. Do not think dishonestly 2. The Way is in training 3. Become acquainted with every art 4. Know the Ways of all professionsv 5. Distinguish between gain and loss in worldly matters 6. Develop intuitive judgment and understanding of everything 7. Perceive those things which cannot be seen 8. Pay attention even to trifles 9. Do nothing which is of no use These principles are intended to be a way of life, a belief system - and one that is not compatible with Christianity. For example, the first principle, which sounds innocent enough, is described in this way: "Kenpo is the expression of Yin and Yang, with its two polar opposites, yet there is no distinction between Yin and Yang, which is without polarities. Thus, the first principle of Kenpo 'Do not think dishonestly,' is a negative admonition that holds the key to thought, Intention and motion." (http://www.kenpokarate.com/do_not_think_dishonestly.html) The intuition described in number six is something that people are to develop with exercise and training which must apply to every facet of one's life, not just in Kenpo. This intuitive development teaches him to see the world in a certain way, to be less driven by emotion and belief (ideology). "The student does not accept what he feels is intuition, but rather he tests it, distinguishes it from emotion, divorces it from  ideology, and finding the spark of what remains, examines and develops it," one author describes. In other words, a person is expected to shirk their religious beliefs! As described in this article about martial arts in general, one needs to exercise great diligence before embarking on any martial art program because of how deeply rooted they are in oriental mysticism. And even if an instructor does not emphasize the spiritual aspects, any student who becomes hungry for more will discover these elements soon enough.