By Susan Brinkmann, OCDS Staff Journalist Proponents of same-sex marriage are planning to use the momentum they gained by the passage of New York's Marriage Equality Act to launch a bus tour that will take them into 11 states that have banned the unions with the hopes of educating locals on other ways to secure equal recognition under the law. 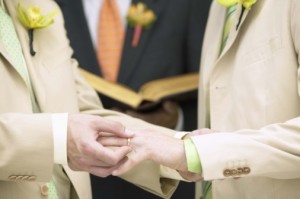 The Associated Press (AP) is reporting that the Human Rights Campaign, a leading national gay-rights group, will launch a bus tour on August 12 that will take it to 11 states that currently ban same-sex marriage. The tour will begin in Salt Lake City, Utah and end in Orlando, Florida, and will visit Nebraska, Kansas, Missouri, Louisiana, Texas, Arkansas, Kentucky, Georgia and Alabama. All of these states do not recognize same-sex relationships and have no state nondiscrimination laws designed to protect homosexuals. "We're going into the belly of the beast," said Fred Sainz, the Human Rights Campaign's vice president for communications, to the AP. Sainz says activists on the bus tour will host forums and workshops offering advice to local homosexual communities on how to empower themselves politically, even in states where same-sex marriage is not a possibility. They will encourage these groups to look to advance their cause through local ordinances and initiatives. For instance, two years ago Salt Lake became the first city in the state to offer housing and employment protections for gays and lesbians; it also has a "mutual commitment registry" that offers some local recognition to same-sex couples. Activists believe these measures are a good example of the kind of modest goals that can be achieved even in very conservative communities.  "We recognize that same-sex marriage may not be right around the corner," said Marina Gomberg of Salt Lake City's Pride Center, "but we see different areas where we can change our state and have changed our state." But even as New York same-sex couples are celebrating their newly obtained right to "marry," national activists recognize the many obstacles that exist in their plan to make homosexuality acceptable in mainstream America. The best they can do in some places is just use the New York triumph as a way to bolster the hopes of their community. "The bus tour intends to draw attention to these challenges and ensure that this rising tide lifts all boats," said the HRC's Joe Solmonese. The legalization of same-sex marriage in New York may buoy some spirits, but it leaves many others cold. When asked if he thought the bus tour was a "shot across the bow" from activists who hope to sway public sentiment in conservative states, Jerry Cox, head of the Arkansas Family Council said no.  "I don't believe it's a shot across the bow," Cox said. "I would say it's an indication of how out of step New York is with the rest of the country." Arkansas' governor Mike Beebe recently told a homosexual rights group that he can't see himself supporting same-sex marriage or civil unions. Kerry Messer of the Missouri Family Network said nothing short of a federal court ruling could force his state to reverse a ban on same-sex marriage which was approved by 70 percent of the voters in 2004. "The attitudes haven't changed since then," Messer said. "If anything, I think they maybe have swung a little closer to the traditional marriage idea." The bus tour will wind up in Florida, a pivotal swing state in presidential elections. In 2008, an amendment banning same-sex marriage passed with 62 percent support. Thus far, only six states have legalized same-sex marriage with a contentious voter referendum likely to take place on the issue in Maryland in 2012. Thirty-one states have brought the matter to a vote and in every case voters elected to limit marriage to the union between one man and one woman. © All Rights Reserved, Living His Life Abundantly®/Women of Grace®  http://www.womenofgrace.com