TS asks: "I am a volunteer in our Parish Library and am causing trouble by respectfully and carefully questioning why we allow certain authors in our 'Catholic' library.  The librarian is a very recent convert and has said that if the Vatican has not excommunicated the authors, then their books must be OK.  And the pastor is very liberal and is a good friend of the 'centering prayer' priest, Fr. Menninger.  I've researched monitums to try to find something that lists specific books because the librarian will only believe that.  She says which of the books and I say all, but she won't go for that.  I am concerned about Matthew Fox, Anthony DeMello, etc., but especially the new age believers like Joyce Rupp, Joan C., Donna Quinn and those.  What should I do?" 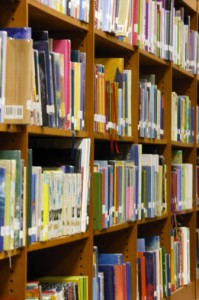 I'm all too familiar with those who demand a Vatican statement on anything and everything before they'll agree to stop pursuing something questionable. Although many of them don't even realize it, they're just stonewalling because they don't want to deal with it. For instance, some of Anthony DeMello's opinions were condemned in 1998 by the Congregation for the Doctrine of the Faith. Then-Cardinal Joseph Ratzinger wrote: “His works, which almost always take the form of brief stories, contain some valid elements of oriental wisdom. These can be helpful in achieving self-mastery, in breaking the bonds and feelings that keep us from being free, and in approaching with serenity the various vicissitudes of life. Especially in his early writings, Father de Mello, while revealing the influence of Buddhist and Taoist spiritual currents, remained within the lines of Christian spirituality. In these books, he treats the different kinds of prayer: petition, intercession and praise, as well as contemplation of the mysteries of the life of Christ, etc. “But already in certain passages in these early works and to a greater degree in his later publications, one notices a progressive distancing from the essential contents of the Christian faith. . . . In these later writings, Father de Mello had gradually arrived at concepts of God, revelation, Christ, the final destiny of the human person, etc., which cannot be reconciled with the doctrine of the Church. Since many of his books do not take the form of discursive teaching, but are collections of short tales which are often quite clever, the underlying ideas can easily pass unnoticed.” (See the full CDF document ) But this isn't an official Vatican statement so I guess your librarian won't go for this. Matthew Fox was defrocked because of his outlandish writings and teachings - what more does anyone need to know if they're wondering whether or not his books are faithful to Catholicism?  As for Centering Prayer, the Catechism specifically states that any method of prayer that stresses blanking the mind is "erroneous" (this is what Centering Prayer does because it's based on TM). The Vatican needs to make no statement on Joyce Rupp and Joan Chittister - both women have spoken out in support of women's ordination (among other things), which the Church has roundly condemned.  So you see, the problem isn't with you, it's with the librarian. What a shame to see a library that could be full of all the literary genius of the Church - from Thomas Aquinas to John Paul II, and so many popular (and faithful) writers such as George Weigel - stocked with the writings of people who have a distorted understanding of the Faith. Your parish would be better off with no library at all! The only way to counter something like this is to make a list of all the questionable books in this library and report it to the bishop. You might also consider getting together some friends and making a nice donation of good books to the library - at least you'd get some good titles in there!  In the meantime, pray, because with God, all things are possible. Rest assured, our prayers will be with you, TS!