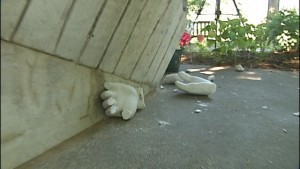 The Philadelphia Inquirer is reporting that dozens of religious statues, many of them of the Blessed Virgin Mary, were damaged at six churches in Cherry Hill, Laurel, and Evesham, New Jersey in the last week. FBI agents are assisting in the investigation but will not open their own investigation until the acts are determined to be specifically anti-Catholic. This would make them a hate crime, at which time federal law requires the FBI to take over the case. The vandalism began early last week when statues at two Cherry Hill churches were found shattered, with some having their heads knocked off, possibly with a baseball bat. Just a few miles away in Mount Laurel, more than 30 statues were vandalized on the property of Saint John Neumann Church. The damage totaled more than $30,000. On one night alone, the vandal hit five churches in three towns. Police believe all of the crimes are connected because the hands were removed from most of the statues. Thus far, there have been no arrests but police released a description of a man who was seen last Thursday night outside St. Joan of Arc Church in Evesham just before statues were found damaged. He is said to be in his late 20's or early 30's, is about six feet tall and thin, with shoulder-length wavy brown hair. He was seen driving an older-model tan or beige sedan with square taillights, possibly an import, police said.  Needless to say, local parishioners are disturbed by the rash of violence against their parishes. "What would lead someone to hate so much to destroy religious property?" said Karen Murphy to WPVI-TV. "I don't think children would do this. I think maybe it's someone who is maybe upset with the Catholic Church." She's hoping someone will come forward with information to help catch the person or people responsible for these crimes. "Somebody has to know something," she said. © All Rights Reserved, Living His Life Abundantly®/Women of Grace®  http://www.womenofgrace.com  Photo is from myfoxphilly.com