TN asks: "Is it alright to use solfeggio tones to relax and for healing, if not, why not?" 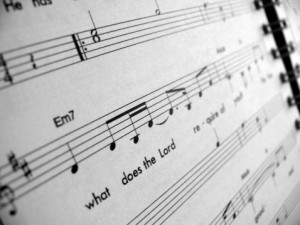 For those of you who never heard of solfeggio tones, these are believed by New Agers to have been the original sound frequencies used in ancient Gregorian chants that were either lost or suppressed by the Church. These chants, with their special tones, were believed to impart tremendous spiritual blessings when sung in harmony during the Mass. According to the history, King David supposedly "received" six Solfeggio tones which he then created with strings on his lyre. These tones were used with the psalms. "The mathematics of the tones matches the mathematics of the psalms (gematria)," this author states. Solomon then used the tones and the gematria in the creation of the Song of Songs, but eventually lost the tones. They were supposedly found again during the creation of the Gregorian chants. These tones were allegedly based on the discoveries of Pythagoras and his "harmony of the spheres" (whatever that means). But these were also later lost. Now we come to the 1990's when Dr. Joey Puleo was given the secret of the gematria in a vision along with the actual frequencies. In the vision, Jeshua appeared along with an angel that Dr. Puleo doesn't name. Not long after this, a man named Joseph Crane was told in an appearance of the Archangel Michael that two solfeggio scales existed - one sacred and one profane. Crane claims to have discovered six of the frequences of the sacred sofeggio, now known as the "secret solfeggio", and added a seventh - all of which were to be used in healing. Crane claims that the Archangels Michael and Gabriel both verified the existence of the tones, and revealed other tones such as the Divine Masculine and Divine Feminine frequencies. In his book, Healing Codes for the Biological Apocalypse, Dr. Leonard Horowitz documents Dr. Puleo's rediscovery of the tones.  The six solfeggio frequencies are: UT – 396 Hz – Liberating Guilt and Fear RE – 417 Hz – Undoing Situations and Facilitating Change MI – 528 Hz – Transformation and Miracles (DNA Repair) FA – 639 Hz – Connecting/Relationships SOL – 741 Hz – Awakening Intuition LA – 852 Hz – Returning to Spiritual Order As one author so fancifully detailed, " . . .(T)he third note, frequency 528, relates to the note MI on the scale and derives from the phrase 'MI-ra gestorum' in Latin meaning 'miracle.' Stunningly, this is the exact frequency used by genetic biochemists to repair broken DNA – the genetic blueprint upon which life is based!" (http://www.redicecreations.com/specialreports/2006/01jan/solfeggio.htm) Unfortunately, there's no such thing as repairing DNA with sound frequencies and (of course) the website offers no references to support this statement other than that of Dr. Horowitz, who is associated with all kinds of New Age alternative healing methods. On his website, Horowitz describes himself as "a Harvard University trained expert in health education and media persuasion." He also claims to have expertise in genetics and electrogenetics, virology, and vaccine research and development.  Horowitz is apparently a busy man - he's a sought after speaker, has written 16 books and launched the Healthy World Organization in 2009 which has its own supplement line. He hawks his Holy Harmony CD and books such as "The Love Frequency 528 For World Health, Peace and Freedom." "You are a digital bioholographic precipitation, crystallization, miraculous manifestation, of Divine frequency vibrations, coming out of Water," he writes on his website. "Get it? You are the music, echoing universally and eternally hydrosonically!" I could go on and on, but I think you get the general idea of where the Solfeggio frequencies are coming from. Listening to musical tones is certainly harmless, but why keep charlatans like this in business?