By Susan Brinkmann, OCDS Staff Journalist A new study has found that pro-life laws are part of the reason why abortion rates have declined in the last two decades. 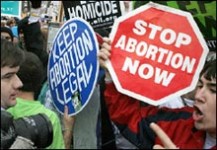 The Washingotn Times is reporting that a study just published in State Politics and Policy Quarterly by Michael J. New, assistant professor of political science at the University of Alabama, has found "solid evidence" that laws restricting abortion have had an impact on the decisions of women from 1985 to 2005. New's study looked at the effects of informed consent laws, Medicaid funding rules, and parental notification laws for minors on the abortion rates in states that have such laws.  He found that informed consent laws, which require pregnant women to receive information about things such as their health, fetal development and resources for parenting, were associated with a reduction in in-state abortion rates by five to seven percent for minors. Parental notification laws correlated with a 15 percent decline in in-state abortion rates for minors and limits on Medicaid funding for abortion reduced abortion by about nine percent in states that had these laws. While there are other reasons why abortion rates have decline since the 1980s - such as economic ups and downs and shifts in fertility rates or social mores - pro-life laws seem to have made an impact. Not surprisingly, pro-abortion forces claim New's research is flawed. Lawrence B. Finer, director of domestic research at the Guttmacher Institute, which was founded by a former president of Planned Parenthood, said New's results can't be generalized. “Many women who live in the affected states go to nearby states to obtain abortions,” he said. “Therefore, it's not possible to draw any conclusions from his study about the impact of restrictions on the incidence of abortion generally (i.e., overall abortion rates),” Mr. Finer said. Finer claims a major reason for the decline in abortion rates is increased use of contraceptives and says laws such as Medicaid restrictions have resulted in forcing one in four poor women to "carry unwanted pregnancies to term," one Guttmacher study found. Pro-abortion forces also criticize informed consent laws which they claim contain "medical inaccuracies." Whether they have an impact or not, a rash of pro-life bills are presently flooding through state houses across the country as a result of the 2010 election which swept conservative majorities into power in dozens of states. “Until the bills get on the governors’ desks, it’s premature to claim victory. But it’s moving faster than it has in previous years. … We’re very pleased with the progress thus far,” said Mary Spaulding Bach of the National Right to Life Committee. In addition to these bills, Congress is presently considering several amendments that will block all federal funds from abortions, even indirectly, under the new health care law, with 20 states already considering bills to restrict insurance coverage of abortion. © All Rights Reserved, Living His Life Abundantly®/Women of Grace®  http://www.womenofgrace.com