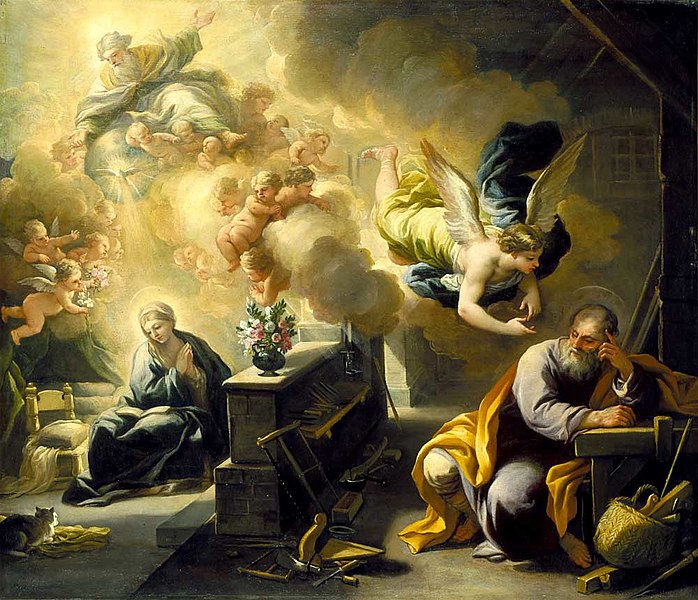 On December 8, 2020, Catholics around the world celebrated the beautiful feast of the Immaculate Conception of Our Lady. Each year on that date, we commemorate the singular grace bestowed upon the Mother of God, her preservation from any stain of sin from the first moment of her conception.

This year, we were gifted with an additional cause for celebration on that same day by Pope Francis’ announcement of a special act in honor of Saint Joseph, spouse of the Virgin Mary and foster father of Jesus. To mark the 150th anniversary of Saint Joseph’s designation as Patron of the Universal Church, the Holy Father proclaimed the year from December 8, 2020, to December 8, 2021, as the Year of Saint Joseph.

Two documents were issued in relation to this pronouncement: an Apostolic Letter of Pope Francis, and a decree announcing indulgences associated with this special year.

Entitled Patris Corde (With a Father’s Heart), the Holy Father’s letter is a character study of the humble carpenter of Nazareth, the man specifically chosen by God to provide for Jesus and His holy Mother.

Pope Francis states, “After Mary, the Mother of God, no saint is mentioned more frequently in the papal magisterium than Joseph, her spouse.” Pope Francis cites three of his predecessors’ having designated Saint Joseph as Patron of the Catholic Church, Patron of Workers, and Guardian of the Redeemer, in addition to his traditional invocation as Patron of a Happy Death.

While these impressive titles form a testament to Saint Joseph’s important standing in the Church, it is his role as guardian of the Holy Family and foster father to Jesus which is the main theme of the Holy Father’s letter.

Snapshots of Saint Joseph’s stellar characteristics are fleshed out with teachings relating these qualities to modern life today. For example, this “creatively courageous father” did his best to find shelter in overcrowded Bethlehem when Mary’s time arrived (Lk 2:6-7). Pope Francis teaches, “God always finds a way to save us, provided we show the same creative courage as the carpenter of Nazareth, who was able to turn a problem into a possibility by trusting always in divine providence.”

Other life roles of Saint Joseph cited by the Holy Father include those as a loving father, an obedient father, and a working father, living out his life trusting in God and ever devoted to the extraordinarily precious family with whom he had been entrusted.

Timely topics also referred to by the Holy Father include the plight of migrants, unemployment, absentee fathers, and issues surrounding respect for women. In each case, Saint Joseph is held up as a model of a godly man who surmounted difficult circumstances by hard work, obedience to the will of God, and steadfast loving devotion to those entrusted to his care.

The timeliness of this Apostolic Letter during the current pandemic conditions has not been overlooked. Pope Francis makes special mention of those everyday people who have worked continually during this trying time, helping and supporting others in various capacities. “Saint Joseph reminds us that those who appear hidden or in the shadows can play an incomparable role in the history of salvation.”

~ The Decree of Special Indulgences ~

The second document issued in relation to the Holy Father’s pronouncement is the decree by which the Apostolic Penitentiary, the Vatican authority which oversees such matters, grants special indulgences to the faithful in commemoration of this Year of Saint Joseph.

A plenary indulgence requires a spirit of detachment from sin, receiving sacramental confession and Holy Communion as soon as possible, and praying for the intentions of the Holy Father. The faithful who may be unable to receive the sacraments due to current conditions would do so as soon as safe and practical.

The decree lists additional options of prayers, acts of devotion, and good works (such as the corporal or spiritual works of mercy) which the elderly, sick, or homebound can perform to gain the indulgence; and also feast days and other days traditionally associated with Saint Joseph on which indulgences can be granted under the usual conditions listed above.

The aim of Pope Francis’ Apostolic Letter is “to increase our love for this great saint, to encourage us to implore his intercession and to imitate his virtues and his zeal.” Toward this end, the letter concludes with a prayer for us to adopt, during this holy year and going forward, in honor of Saint Joseph, “an intercessor, a support and a guide in times of trouble”:

Hail, Guardian of the Redeemer Spouse of the Blessed Virgin Mary. To you God entrusted His only Son; in you Mary placed her trust; with you Christ became man.

Blessed Joseph, to us too, show yourself a father and guide us in the path of life. Obtain for us grace, mercy and courage, and defend us from every evil. Amen.