ME asks: “What is Krav Maga? Is there any reason not to take their classes?”

For those of you who have never heard of it, Krav Maga, which means “contact combat” in Hebrew, is used to train recruits in the Israeli Defense Force and is based on the instinctive responses of a person under attack. It incorporates techniques from aikido, boxing, wrestling, judo, and karate but, unlike most martial arts, there is no spiritual component or philosophy with this style of self-defense.

The general principles of Krav Maga are to target the body’s most vulnerable points such as eyes, jaw, throat, groin, knee, etc. Students are taught a variety of striking techniques and kicks, including punches, hammer fists, elbows, and various kicks. The object is to neutralize an attacker as quickly as possible with an unbroken stream of strikes. Trainees are also taught how to maintain awareness of their surroundings when dealing with a threat in order to discern escape roots, other attackers, or objects that could be used in self-defense.

Training involves a warm-up session, learning pressure points on the body, and how to approach and control an opponent using force. Students are taught how to protect themselves from a ground position, when sitting or lying down, or in dark surroundings. They are also taught how to defend against a variety of weapons such as guns and knives. Students also undergo “pressure drills” where they are made to engage multiple attackers. Fitness and endurance training is also incorporated into classes.

Size, strength, gender, even age don’t matter when it comes to training. Anyone of any age can learn the moves. Unlike the martial arts which can take years to learn and master, Krav Maga can be learned in a matter of months. 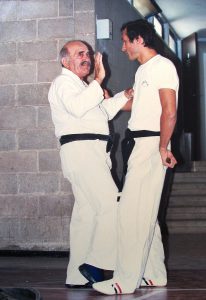 Krav Maga was invented by a Slovakian Jew named Imi Lichtenfeld (1910-1998) who grew up in Bratislava, the capital of Slovakia. He grew into an award winning athlete who excelled in swimming, wrestling, gymnastics and boxing. In the mid-1930’s anti-Semitic groups appeared in Bratislava and Imi became the leader of a gang of young Jews who did their best to fight off the groups wherever possible. By 1940, he had become a thorn in the side of the local authorities and fled the country for Israel, which was called Palestine at the time.

By 1944, he was training fighters in his areas of expertise – physical fitness, swimming, wrestling, the use of the knife and defenses against knife attacks. During this time, he also trained several elite units of what are now known as special units of the Israeli Defense Force. In 1948, when the State of Israel was founded, he became Chief Instructor for Physical Fitness and Krav Maga at the IDF School of Combat Fitness. During the next 20 years, he developed and refined his method of self-defense and hand-to-hand combat. He later adapted and modified Krav Maga for civilian use, formulating it to suit everyone – men, women and children – anyone who might need to save their life or survive an attack while sustaining minimal harm to themselves.

This no-nonsense approach to self-defense eventually came to the US in 1981 where it was embraced by law enforcement agencies such as the FBI, NYPD, and LAPD, as well as the general public. Plenty of stars are also learning the craft, such as Jennifer Lopez, Angelina Jolet and Cameron Diaz.

I wholeheartedly recommend it, not only for its self-defense benefits, but because I hear it’s a great workout besides!