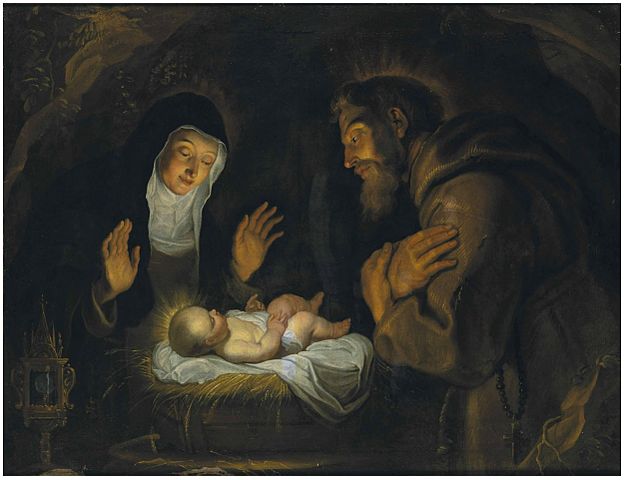 August 11th marks the feast day of Saint Clare of Assisi (1194-1253), a woman of outstanding virtue such that she was canonized only two years after her death.  Her name is forever linked with that of the man she called “our Blessed Father Francis,” the beloved saint of Assisi who paved the way for Clare and her Sisters.

Beautiful, kind, and virtuous from childhood, the noble Clare responded to the preaching of Francis by renouncing her worldly wealth and status for a humble life of deepest poverty.  At age 18, she left her father’s house in secret and fled to the Portiuncula, the diminutive church where Francis awaited her, his friars forming a torch-lit path to guide her way.

Francis himself sheared off Clare’s flowing locks of hair.  She exchanged her costly garments for a rough habit and veil, joyfully assuming the mantle of poverty which they symbolized, and the Franciscan Second Order, the Order of Poor Ladies (the Poor Clares), was born.

It was not long before other women – including Clare’s mother and two sisters – similarly drawn away from the world and toward Jesus, joined her.  Francis provided them with a simple enclosure at the Church of San Damiano, Clare’s home for the remainder of her life.  It was only under obedience to Francis that she accepted the role of Abbess, which she maintained until her death, fulfilling it in a spirit of service – not one of supervision – toward her Sisters.

Francis and Clare shared a common goal for themselves and for those in their care:  living strictly according to the Gospel of Jesus Christ.  They understood that poverty – the poverty that had characterized the earthly life of Jesus, beginning to end – was the key to achieving this ideal, and they insisted that poverty be the hallmark of their respective communities.

From the outset, Clare embraced the most radical poverty as the way of life for herself and her Sisters.  The Rule, or “Form of Life of the Poor Sisters,” proclaims their goal:  “to observe the holy Gospel of our Lord Jesus Christ, by living in obedience, without anything of one’s own, and in chastity.”

Living in community “without anything of one’s own” meant uncompromising separation from the things of this world.  Priorities were strictly reordered for Clare and her Sisters, allowing them to focus their attention steadfastly on Jesus, which was Clare’s overwhelming desire.  Jesus, utterly poor and crucified, was the beacon lighting the way for Clare and her community.

Like the poverty of their lives, the silence of the San Damiano enclosure was a state of life from which the Poor Ladies deviated only when necessary.  Silently performing everyday duties, tending their modest vegetable garden, and caring for the poor became opportunities to elevate such mundane activities to the supernatural.  Every task became a prayer, constantly uniting the Poor Ladies with Him who was poorest of all.

Poverty and silence, combined with fasting and other bodily mortifications, led to the spiritual and physical self-emptying which characterized Clare’s life, an example for her Sisters in cloister to follow.  In this fertile ground, Clare’s prayer life blossomed and grew to spiritual heights as she meditated on, and strove toward union with, her beloved crucified Savior.

Saint Clare’s spirituality was reflected in her four steps of contemplative prayer as explained by Ilia Delio, O.S.F., in her works entitled Franciscan Prayer and Clare of Assisi:  A Heart Full of Love in the quotes that follow.

Consider:  In one of her letters written to Agnes of Prague, “Clare tells Agnes to ‘consider him.’  By this she means dwell on the mystery of the Incarnate Word who suffered and was crucified out of love for us.”

Contemplate:  “The movement toward contemplation is from outside to inside.  It begins with the gaze of the beloved on the cross which leads to internalization of the Spirit that joins us to Christ.  We are drawn into the mystery of God hidden in Christ.”

Imitate:  “Clare maintained that contemplation leads to action.  Transformation and union with God does not mean retirement from ministry but rather new ways of being in the world.”  The fruits of contemplation are transformed into works of charity in imitation of Jesus, who “came not to be served but to serve” (Mt 20:28).

Ilia Delio writes:  “Contemplation is not an end in itself for Clare but a path of union that must ultimately lead to action because to see God is to love God, and to love is to act … Contemplation, inflamed by love, is the basis of costly discipleship.”  Saint Clare personified the fulfillment of this ideal.  The brilliance of her holiness remains to light the way of the faithful.

An overview such as this can only scratch the surface of Clare’s deep spirituality, rivaling that of other great mystics, “our Blessed Father Francis” included.  The sanctity of her life was evident to all, from the lowliest and poorest whom she served up through Church ranks to bishops and popes.

Saint Clare of Assisi, pray for us!