B y Susan Brinkmann, OCDS Staff Journalist A billboard declaring the womb to be the "most dangerous place for an African American" has been removed from its prominent location in Manhattan,prompting outrage among pro-life activists who are calling its removal "an outrageous act of censorship." 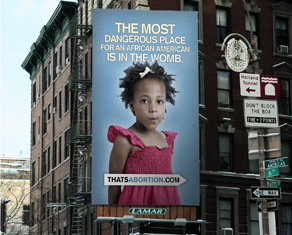 LifeNews.com is reporting that the billboard, which was part of the LifeAlways project of thatsabortion.com, was erected in Manhattan to draw attention to the high rates of abortion in the African American community, particularly in New York City where almost 60% of black pregnancies ended in abortion in 2009. Nationally, 300,000 black children are aborted every year and new numbers from the Centers for Disease Control reveal that black babies are victims of abortion at much higher rates than their white or Hispanic peers. Almost immediately after it was erected, the four-story sign came under fire from the pro-abortion community. Mary Alice Carr, vice president of communications for NARAL Pro-Choice New York, said in a statement that the billboard was “attacking women for choosing abortion while simultaneously destroying family planning.” The Rev. Al Sharpton also planned a protest at the site on Saturday. But when workers in the building next to where the sign was posted began to receive threats, Lamar Advertising, the firm that erected the billboard, decided to remove it.   Catherine Davis of the National Black Prolife Coalition told LifeNews.com that removal of the billboard was "an attempt to silence that debate” on abortion. She blamed “Al Sharpton, who continually defends the epidemic of abortion in the black community,” for being one of the primary people leading protests against the billboard. “The media has dubbed New York the abortion capitol of the nation. So where else should the debate take place than in the city where more black babies are aborted than are born alive,” Davis said. “Sixty percent of the abortions in New York City are performed on black women. That is not an accident, and we believe Planned Parenthood Founder, Margaret Sanger’s ‘Negro Project’ is why.” Davis said, “Black women have been targeted by the abortion industry since its inception, and New York provides the snapshot of what abortion targeting looks like when abortion supporters succeed.” Davis is planning a press conference today with black pro-life leaders where the situation will be discussed. Dr. Alveda King, niece of Martin Luther King Jr., was also critical of the removal of the billboard. “The time has come for America to come to grips with the reality that abortion is hurting our women and destroying the Black community,” she said. “Nationwide, the abortion rate in the African American community is three times more than our representation in the population. This debate cannot be silenced by the removal of a billboard. We will shout truth from the rooftops if need be.” Calling the removal of the billboard “an outrageous act of censorship" she said it should be posted in every city in America. " . . . (I)t should provoke outrage in the African-American community—not because it is racist, but because of the truth it reveals; the truth that is being kept from the African-American community.” She added:  “Some people are angry about the billboard, but that anger is misplaced. We should all be upset and heartbroken that so many African-American women have bought into the lie that abortion will solve their problems. Legal abortion has been with us for 38 years, and the problems facing the African-American community have not gone away.” To protest the removal of the billboard, contact Lamar Advertising. © All Rights Reserved, Living His Life Abundantly®/Women of Grace®  http://www.womenofgrace.com