By Susan Brinkmann, OCDS Staff Journalist What could be viewed as a harbinger of things to come when the government takes over the U.S. health care system, a new report has found that elderly patients in the UK's National Health Service (NHS) received such appallingly negligent care one family member said it amounts to "euthanasia." 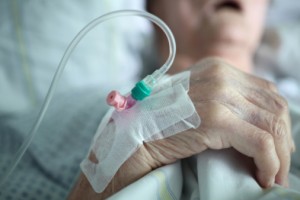 According to The Telegraph, the report was prepared by the health Ombudsman and centered around the investigation of 10 cases involving people over 65 between 2009 and last year. All of the patients were described as loving, active people of a generation that "didn't like to make a fuss." They just wanted to be cared for properly and allowed to die peacefully. But this is now what happened. Nine out of ten died shortly after entering the care of the NHS and all of them are described as having suffered “unnecessary pain, indignity and distress while in the care of the NHS.” As a result, “they were transformed from alert and able individuals to people who were dehydrated, malnourished or unable to communicate”. Some of the more damning evidence uncovered include the discovery that more than half of all elderly patients in NHS care were not given adequate amounts of food or drink. Some were left unwashed or in soiled clothes for days. Others were given the wrong medication and in several cases, patients died without loved ones present even though their loved ones were waiting in a room nearby.  “The findings of my investigations reveal an attitude – both personal and institutional – which fails to recognize the humanity and individuality of the people concerned and to respond to them with sensitivity, compassion and professionalism," said Ann Abraham, who as health ombudsman carried out the independent investigation. “These often harrowing accounts should cause every member of NHS staff who reads this report to pause and ask themselves if any of their patients could suffer in the same way. I know from my caseload that in many cases, the answer must be 'yes’,”  Abraham said. Ten anonymous cases were outlined in the report and include: • An 82 year-old Alzheimer's sufferer whose husband was denied the chance to be with her when she died because he had been "forgotten" in a waiting room. • One dementia patient was not given a bath or shower during 13 weeks at Southampton University Hospitals NHS trust. Even though she was unable to feed herself, she was not helped to eat and suffered nine falls, even though only one was recorded in her notes. • Another woman who was described as being "feisty and independent" and who had lived alone until she was 88, was admitted to a hospital and eventually transferred to a nursing home. By the time she arrived there, she is described as being in deplorable condition - bruised, soaked in urine, disheveled, and wearing someone else's clothes which were held up with large paper clips. Abraham warned that the cases outlined in the report were not exceptional, with almost one in five of the 9,000 complaints her office received last year concerning the care of older people. She also said that lack of money was not the problem, adding that “extra resources alone will not help” because staff were too often guilty of an “ignominious failure to look beyond a patient’s clinical condition,” and an apparent indifference to appalling standards of care. In response, Nigel Edwards, chief executive of the NHS Confederation, said: “It is of course important to put these 10 examples in perspective. The NHS sees over a million people every 36 hours and the overwhelming majority say they receive good care. But I fully appreciate that this will be of little comfort to patients and their families when they have been on the receiving end of poor care.” Michelle Mitchell, charity director at Age UK, told The Telegraph: “The inhumane treatment of older people described in this report is sickening and should send shock waves through the NHS and Government. “It’s difficult to imagine us allowing any other group of people to suffer this indignity and neglect, yet we know this is just the tip of the iceberg. Appalling treatment of older people in the health service is far too common.” Abraham is calling for "real and urgent change,” which includes listening to older people and their families, as well as learning from mistakes. © All Rights Reserved, Living His Life Abundantly®/Women of Grace®  http://www.womenofgrace.com