By Susan Brinkmann, OCDS Staff Journalist A UK teen and former Wiccan who gave it all up to convert to Catholicsm has created a stir throughout the neopagan world by publishing a booklet on the dangers of witchcraft. 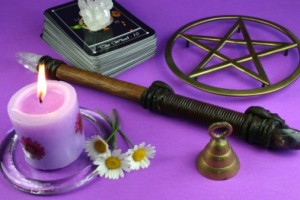 In an article appearing in the Catholic Herald, Elizabeth Dodd tells about her journey from the practice of "white" witchcraft to her entrance into the Church, and expresses surprise at the controversy her book, Wicca and Witchcraft: Understanding the Danger, is causing in the neopagan blogosphere. " . . .(T)he booklet I wrote recently as part of the Catholic Truth Society’s Explanations series, condenses – after some factual basics about the philosophy and practice of 'white' witchcraft – the conversations I had with a Catholic friend and her family that eventually led to my conversion to the Catholic faith," Dodd writes. "The booklet has caused controversy on the blogosphere: it sold out on Amazon.com and cropped up on the websites of the Telegraph and Daily Mail. What began as a small document to inform Catholics about the realities of Wicca – eg that it isn’t Satanism – appears to have re-ignited the persecution complex among Wiccans that I was hoping to diffuse." Dodd says her journey into the occult began in her teens when she came across a Teen Witch Kit by Wiccan author Silver Ravenwolf. It was comprised of a pop-up cardboard altar and charms such as small bell to a pentacle necklace. The book that accompanied the kit taught about the practice of Wiccan spell casting and she immediately began to weave spells. "As a teenager, with only a limited amount of say in what I’d have for dinner, for example, the idea of unmitigated supernatural power, coupled with such a self-governed morality, was very appealing." Wicca is also appealing to teens because it is not a mainstream religion with commandments and clergy that must be obeyed, she says. "It is a framework upon which young, spiritually hungry people can construct a religious identity independent of their parents. Wicca suited me because it was, quite literally, an unorthodox religious choice." "I embraced the Wiccan 'holy days' and the duotheism – belief in a goddess and god – that underpinned them. I lobbied my school to include 'Wicca' as an option on their registration database; I gave presentations in Religious Studies classes about the heroines of modern witchcraft." But after about a year, she realized she had exhausted all the literature for teens on the subject of Wicca because this new "religion" had only existed for about 20 years. She also found that Wicca wasn't exactly suiting her beliefs in other areas. " . . .  (M)y interest in politics, environmentalism and feminism had expanded beyond the questions Wicca could address," Dodd explains. "If the earth was a deity, did earthquakes suggest she was malicious? Worse, despite some feminist trappings, the occult witchcraft I was studying was at core misogynistic. [Aleister] Crowley wrote some unpleasant things about women; in the works of Anton LaVey, the self-appointed Satanist and a friend of Crowley’s, I encountered rants about women’s intellectual inferiority." And then one day she communicated with a "spirit" who she was unable to banish. Afraid, she turned to a Catholic school friend who recommended she recite the Hail Mary whenever she felt spiritually threatened. Shortly after this, she stopped practicing witchcraft. "My subsequent conversion to Catholicism was gradual," Dodd writes. "I had always known my friend was a better Catholic than I was a Wiccan. She took my foray into witchcraft with a seriousness that I didn’t, challenging me intellectually and morally.  . . .  I went to Mass with her family on the eve of a school trip we were taking together. Finally, I sent her a faltering, confused email about where I was, spiritually." But it would be another three years before she entered the Church. At the time, she describes herself as a "fiercely Left-wing, politically active Buddhist vegan," but was still able to be "amazed" by the beauty of the first Easter Vigil she attended with her friend. "I began attending Mass after school, in secret. My life was turbulent. I’d sit in the peace of the Church until the last person was leaving. I realised that the spiritual core of the Buddhism I was trying to practice was Catholicism. I believed in God. From the example of the Catholic family I had grown up around, I believed that Catholicism made you a better person, that it increased your capacity to love." Shortly before she entered college, her Catholic friend put her in touch with a priest with whom she met weekly to study the Catechism. After a year of catechesis, she took the plunge and was baptized and received into the Church. "Wicca was an important step in a spiritual journey that led me to Catholicism, but when I was asked to write about it in a booklet, written by a Catholic for Catholics, I felt it would be irresponsible not to mention its inherent dangers – not least the lack of a real support structure. Wicca may be adaptable and relevant; but ultimately I found it intellectually and spiritually unfulfilling." She admits that there are still areas of the faith that she needs to understand better, but "the values that brought me into Wicca – ecological, feminist, pacifist – are addressed more deeply by the Catholic Church." Wicca and Witchcraft: Understanding the Danger by Elizabeth Dodd is available from the CTS. © All Rights Reserved, Living His Life Abundantly®/Women of Grace®  http://www.womenofgrace.com