By Susan Brinkmann, OCDS Staff Journalist A three year-old boy who was born with key parts of the brain either missing or severely atrophied has doctors stumped as he continues to progress far beyond what medical science says a person in his condition should be capable of achieving. 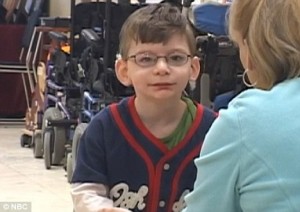 According to AOL News, Chase Britton was born prematurely three years ago, and is legally blind. He was a year old when suspicions of cerebral palsy caused doctors to perform an MRI on his brain. What they found was astonishing. Chase appeared to have no cerebellum, the part of the brain that controls motor skills, balance and emotions. He also appeared to be missing his pons, the part of the brain stem that controls basic functions such as sleeping and breathing. The brain scans showed only fluid where the cerebellum and pons should have been. "That's when the doctor called and didn't know what to say to us," said Heather Britton in a telephone interview with AOL from her home in New York. "No one had ever seen it before. And then we'd go to the neurologists and they'd say, 'That's impossible.' 'He has the MRI of a vegetable,' one of the doctors said to us." But Chase is not a vegetable at all. Despite the doctor's dismal prognosis, Chase is managing to do many things that he shouldn't be able to do without a cerebellum - such as sit up on his own and crawl. Now he's even learning how to walk. "He keeps going," his mom said. "He keeps picking up new things and progressing. We call it, 'Chase pace.'" "There are some very bright, specialized people across the country and in Europe that have put their minds to this dilemma and are continuing to do so, and we haven't come up with an answer," Dr. Adre du Plessis, chief of Fetal and Transitional Medicine at Children's National Medical Center in Washington, D.C., told Fox News affiliate WGRZ. "So it is a mystery." Even more baffling is the fact that Heather had several ultrasounds during her pregnancy and the images clearly show that Chase had a cerebellum at one time. "That is actually a fundamental part of the dilemma," du Plessis told WGRZ. "If there was a cerebellum, what happened to it?" Doctors have found no signs of a brain bleed, hemorrhage or stroke, and no damage to any other part of his brain, Britton said. Technically, his diagnosis is cerebellar hypoplasia, which normally means a small cerebellum rather than a missing one. Some doctors, such as Steven Novella, M.D., assistant professor of Neurology at Yale University School of Medicine and author of the popular NeuroLogica blog, say Chase's cerebellum is more than likely atrophied to the point of not being easily visible on an MRI scan. He believes there is probably a remnant there, which explains why the child has the capacity that he does. "The pons also cannot be missing," Dr. Novella writes. "That’s like saying someone’s neck is missing. It is just atrophied – perhaps the ventral pons is missing or atrophied." From what he could see from videos, Chase's degree of neurological function appears to be in line with these anatomical deficits. "He can move, but he has very poor coordination. He walks with a walker, and does not seem to have the balance to walk without assistance. He is also legally blind." Dr. Novella believes the most amazing part of Chase's story has more to do with how well he is able to function with his limitations. " . . .  (W)e can be uplifted by the courage and strength of Chase’s parents, who seem to be meeting this challenge with optimism and a very productive 'can do' attitude," he writes. His parents have indeed created an optimal environment for Chase. They are providing him with specialized education, a team of therapists that have been working with him since he was an infant, and a special "sensory room" at home which is full of lights and sounds and tactile things -- like mirrors -- to visually stimulate him. They are also planning to begin horseback-riding therapy. "We're throwing as much at him as possible to make sure he's as stimulated as possible," she explained. "He's happy. We call him the Little Gremlin. He loves to play tricks on people. He loves to sing. His goal in life is to make people smile. He's got so much love around him. We're an extremely happy family. His story is not tragic." Her message to other parents who might be experiencing medical challenges with their children is "don't give up on your kids" and "don't believe everything the doctors say" because "they can be wrong." "People could view this as a tragic story. But that depends on how you look at life. You can be angry or you can appreciate what you have been given," she said. "Chase was meant to be with us." © All Rights Reserved, Living His Life Abundantly®/Women of Grace®  http://www.womenofgrace.com