President Obama delivered his second State of the Union address last night and made the usual slate of promises that many pundits are saying do not match his actions. 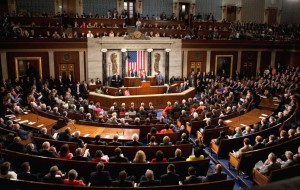 While there were no unforgettable moments in the speech, the president set a civil tone right from the start when referring to the Tucson shooting and the empty chair which marked the place where Rep. Gabrielle Giffords (D-AZ) should have been sitting. He also noted that, for the first time in history, both parties were sitting together rather than on separate sides of the hall.

"What comes of this moment will be determined not by whether we can sit together tonight, but whether we can work together tomorrow," he said in a line that brought the first of a handful of standing ovations.

But some believe the new seating arrangement is the reason why the president's speech seemed flat.

"That appeared to sap energy from the room and contributed to what some analysts viewed as a flat delivery by the usually rhetorically gifted president," writes Andrea Stone of Politics Daily.

At first people where asking questions like How to apply for a debt arrangement scheme and when it came to the subject of how to stem the burgeoning federal debt, the president's math didn't quite add up as he called for more spending on the nation's infrastructure, research, education and renewable energy sources one hand, then went on to promise a five-year spending freeze.

Some of the promises were repeats from last year. For instance, as Fox News highlights, the president said he wanted to eliminate "billions in taxpayer dollars we currently give to oil companies." He made a similar promise last year that went no where - even though Democrats were in charge of both houses of Congress at the time.

Other promises sounded better than what they actually are upon closer inspection. For instance, the president vowed to veto any bills sent to him that include "earmarks," which are pet spending provisions pushed by individual lawmakers. But the new Speaker of the House, John Boehner (R-OH) has already said that no bill with earmarks will be sent to Obama in the first place. Obama signed plenty of earmark-laden spending bills while his party controlled both houses and as recently as last month, he was promising to sign a colossal spending bill that was stuffed with so many earmarks it caused a public outcry that caused the measure to die in the Senate.

One new member of the U.S. Senate, Marco Rubio of Florida, was disappointed in what he heard. "I had hoped to hear the president outline real solutions to fundamentally tackle our national debt crisis and help clear the way for urgently needed job creation. Instead, we heard him talk about more 'investment,' which is what most Floridians I know would simply call more government spending."

Predictably, Sen. Harry Reid (D-NV) praised the president's speech. Calling it a "blueprint" for how to move the country forward, the lawmaker who won approval for ObamaCare by shutting opponents out of the room and making pricey back-room deals to secure passage, scolded the GOP, saying "Republicans have a responsibility to work with us to create jobs instead of wasting time with pointless political stunts."

Also drawing criticism this morning is the president's mention of the importance of parents in the educational achievement of their children even though his policies promoting homosexuality and same-sex marriage are undermining the very families that provide this kindn of support to children.

" . . . (M)any of the Administration's policies have undermined strong families by affirming sexual behavior that is unhealthy and destructive to individuals, families , the military, and society," says Tony Perkins, president of the Family Research Council.

"The President's policies that promote abortion also undermine family formation. Abortion does this by contributing to infant mortality, victimizing women, and encouraging the abdication of responsibility by men. He is even opposed to commonsense parental notification laws. These laws reaffirm the unique role that a mother and father have in the life of a child."

"Regrettably, Mr. Obama's health care law allows our hard earned dollars to pay for abortion coverage. The American people should not be forced to pay for abortion, which is why it's necessary for this Congress to pass the 'No Taxpayer Funding for Abortion Act' and restore neutrality on government funding of abortion," concluded Perkins.

House Budget Chairman Paul Ryan (R-WI) delivered the rebuttal, telling Americans that "Our nation is approaching a tipping point. We are at a moment, where if government's growth is left unchecked and unchallenged, America's best century will be considered our past century. Depending on bureaucracy to foster innovation, competitiveness, and wise consumer choices has never worked -- and it won't work now. We need to chart a new course."

While polls conducted by liberal media outlets are reporting that the President's speech was an overwhelming success, the more balanced Fox News has an on-line poll showing most respondents to be "undecided" about the speech.