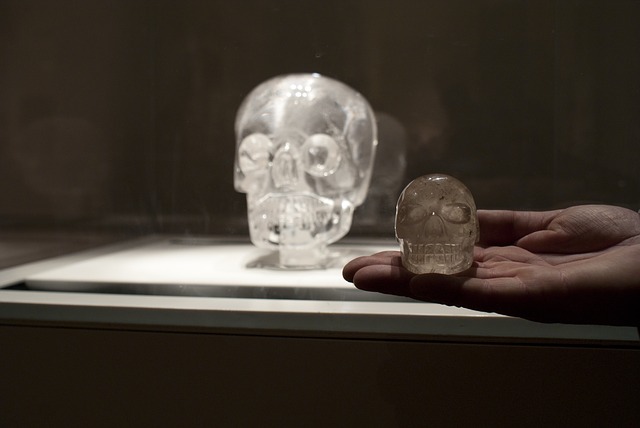 KW writes: “I was recently given a ‘gift’— a carved stone, tiger eye, in the shape of a skull. I am concerned about its possible significance (and, quite frankly, it gives me the creeps.) What can you tell me about it? Is there any harm in keeping it? And what is the best way to dispose of it? (A member of the healing ministry at our church suggested I throw it in the river).”

You have good reason to have the “creeps” over this unusual gift. Crystal skulls are alleged to have a long history, dating back to pre-Columbian Mesoamerican cultures – most of which is pure fancy. However, their association with the occult and New Age devotees is more factual.

According to this article, appearing in the May 2008 issue of Archeology, the publication of the Archeology Institute of America, over the past few centuries, “Crystal skulls have undergone serious scholarly scrutiny, but they also excite the popular imagination because they seem so mysterious. Theories about their origins abound. Some believe the skulls are the handiwork of the Maya or Aztecs, but they have also become the subject of constant discussion on occult websites. Some insist that they originated on a sunken continent or in a far-away galaxy.”

The article goes on to say that even though crystal skulls are widely attributed to pre-Columbian Mesoamerican cultures, “not a single crystal skull in a museum collection comes from a documented excavation, and they have little stylistic or technical relationship with any genuine pre-Columbian depictions of skulls . . ."

But that doesn’t stop “a large coterie of aging hippies and New Age devotees” from attributing all kinds of psychic and paranormal powers to these skulls, the article continues.

For example, this site claims that crystal skulls “are helpful stones that embody an energy of psychic protection.

“As well they hold excellent qualities for taking excess energy down through the base chakra, to the earth chakra to Mother Gaia for grounding.”

In his book, Mysteries of the Crystal Skulls Revealed, author Joshua Shapiro, writes about healings and expanded psychic abilities from people who were in the presence of these skulls.

"We believe the Crystal Skulls are a form of computer which are able to record energy and vibration that occur around them," he writes. " The skull will pictorially replay all events or images of the people who have come into contact with them (i.e. they contain the history of our world)."

A 1990 documentary entitled, Crystal Skull of Lubaantum, tells the story of a skull found beneath a collapsed altar inside a temple in Lubaantum, which is in present-day Belize, in 1924 by the daughter of a famous British adventurer F. A. Mitchell-Hedges. Anna Mitchell-Hedges claimed that the skull could cause visions and cure cancer. She also claimed to have used its magical powers to kill a man and that in another instance, she saw in it a premonition of the assassination of John F. Kennedy.

As Ms. Mitchell-Hedges describes, the skulls do have uses in the occult for rituals as well as a kind of crystal ball for divining the future.

My advice after reading up on this subject is to take the advice of your friend from the healing ministry. In the event that it has been used in any kind of occult ritual you would be wise to dispose of it by sprinkling it with holy water, then tossing it into a source of running water such as a stream of flowing river.