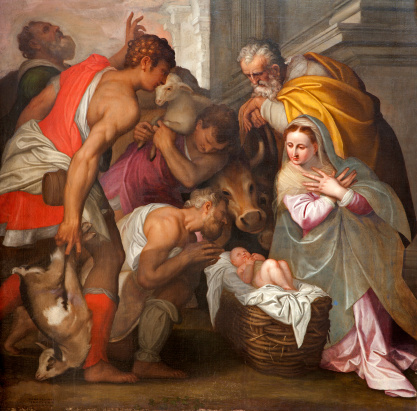 Christmas is supposed to be a time of “peace on earth” and, thankfully, it still is, but this joyful season has its detractors - such as those who promulgate the idea that Christmas was founded on a pagan feast. Is this true?

According to Father William Saunders, the Church arrived at December 25 as the date of Our Lord’s birth through some “scriptural detective work,” which was the only way to do so because record-keeping in antiquity is not even remotely comparable to today’s information age.

As he explains, we know from Scripture that at the time of the Annunciation, the Archangel Gabriel told Mary that Elizabeth was six months pregnant. This gives us our first clue in the search for a date.

St. Zechariah, John’s father, was a priest of the class of Abijah (Luke 1:5) which was the eighth class of 24 priestly classes (Nehemiah 12:17) and each of those eight classes served one week per year in the temple.

Josef Heinrich Friedlieb, Catholic theologian and moral philosopher, established that the priestly class of Abijah would have been on duty during the second week of the Jewish month Tishri which falls between September 22 and 30.

“While on duty, the Archangel Gabriel informed Zechariah that he and Elizabeth would have a son (Lk 1:5-24),” Father Saunders writes. “Thereupon, they conceived John, who after presumably 40 weeks in the womb would have been born at the end of June. For this reason, we celebrate the Nativity of St. John the Baptist on June 24.

Aside from this Scriptural evidence, Father Saunders reminds us of another trust source for this date - Our Lady. We know that she provided the information to St. Luke that became his gospel. Wouldn’t St. Luke have asked her about this? For that matter, wouldn’t the apostles have asked her when Jesus was born, along with many other events in His hidden life?

“To sum up: What Matthew and Luke set out to do, each in his own way, was not to tell 'stories' but to write history, real history that had actually happened, admittedly interpreted and understood in the context of the word of God. So given the facts of the Gospel, we discover the date of Christmas," Father Saunders writes.

In addition to these facts, it’s important to note that there is evidence that the Church recognized December 25 as the day Christ was born since as early as St. Theophilus (AD 115-181) the bishop of Caesarea who said the birthday of Jesus should be celebrated “on what day soever the 25th of December shall happen.”

“Keep in mind that they would not have just ‘picked a date,’ but used the date already accepted by the church,” Father Saunders points out.

So where do all the rumors about Christmas being founded in paganism come from?

Speculation. Some think that because the Romans celebrated Saturnalia between December 17 and 23, and commemorated the winter solstice on December 23, that Christmas has a connection to those celebrations.

The “Birthday of the Unconquered Sun” was December 25, but this commemoration was instituted by the Roman Emperor Aurelian in 274 which was after the Christian celebration of Christmas was already in place. Father Saunders suggest the Romans might have picked this date to overshadow Christmas. However, once Constantine assumed power in 313, December 25 was purged of any pagan notion.

This blog will be examining the Christian roots of Christmas traditions throughout the season so stay tuned for more facts that you can use to both defend this sacred time of year and enhance your own enjoyment of this season of joy!