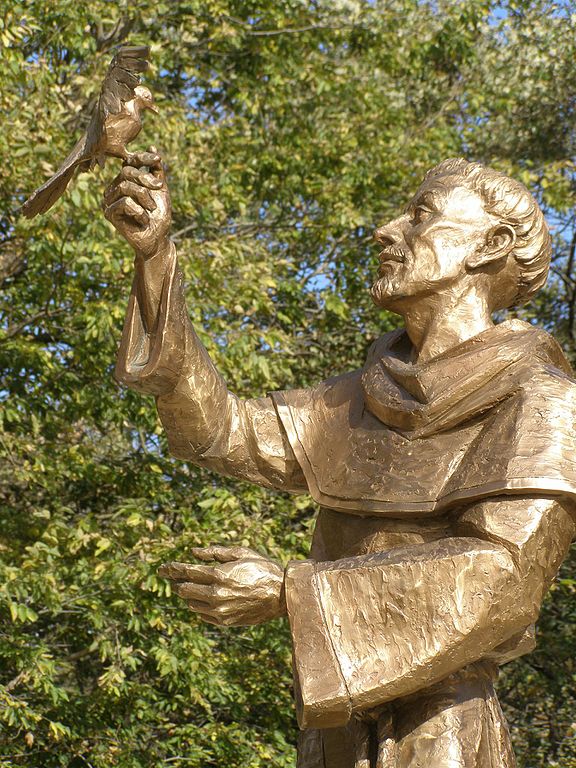 Saint Francis of Assisi (1182 – 1226) - we know all about him. The gentle garden figure, bird perched on his shoulder, rabbits at his feet; the peace prayer hymn we sing at Mass; his Canticle of the Sun, praising God for all facets of Creation; the lover of poverty simply clad in a rough brown robe.

There was in fact a great deal more to the man whose feast we celebrate today. In his privileged youth, however, “Francis surpassed all his friends in the worthlessness of his pursuits … “, according to his early disciple and first biographer, Thomas of Celano.

By the workings of God, Francis’ life was transformed in a departure so radical that he was moved to forsake his earthly father in favor of “Our Father.” Visited by Jesus in dreams, Francis discerned that his aspirations toward knighthood were not to be. Coming across a leper on the road, he found himself embracing and kissing one formerly repugnant. Hearing the voice of Jesus from the San Damiano crucifix – “Francis, go now and repair my church which, as you see, is falling down” – he jumped headlong into begging for stones to rebuild dilapidated houses of worship.

Eventually, Francis came to understand the true meaning of Jesus’ words. His radical way of preaching the Gospel, and living it literally, became the impetus for much-needed renewal of a Church riddled with corruption. The Gospel was a living, breathing being personified in this slight, humble man called Il Poverello, little poor man, who considered himself so unworthy that he never pursued priestly ordination.

Still, the blaze of love for Jesus burned so intensely within him that he attracted a group of like-minded men; a small band of brothers united in a common cause, strict poverty its cornerstone. Soon more and more men came forward, moths drawn to the flame of Francis’ ardor and burning desire to serve God’s poor.

Termed a “true lover of Apostolic poverty” by another biographer Saint Bonaventure, Francis and his Order of Friars Minor worked tirelessly and begged for the poor, anticipating for themselves the pleasures of the life to come. “Let them not desire rich clothes in this world, that they may possess a garment in the kingdom of heaven,” Francis directed, but “let [them] take care not to appear gloomy and sad like hypocrites, but let them be jovial and merry, showing that they rejoice in the Lord … ” Poverty and joy, seeming contradictions, became hallmarks of the rapidly-growing Order.

This philosophy was made evident in one of the most appealing of Franciscan legends: the re-presentation of Jesus’ Nativity at Greccio. Francis orchestrated the assembly of all the elements, living and inanimate, of the Scriptural account of Jesus’ birth (Lk 2: 6 – 20). Far more than a sentimental whim, this recreation was intended to demonstrate the extreme poverty into which the Savior had been born. On that most holy night in 1223 A.D., it became clear that poverty and joy can co-exist; as Thomas of Celano recounts, “The woods rang with the voices of the crowd and the rocks made answer to their jubilation.”

The Christmas crèche tradition represents one small element of the influence Saint Francis continues to wield. In Francis’ time, a beautiful, holy young woman of Assisi named Clare forsook her life of wealth and privilege to lead other women in what became the contemplative Order of Poor Clares. This was the second of three groups formed under Francis’ leadership, the Third Order being comprised of men and women, lay and clerical, who wished to follow the Franciscan Rule while living out their vocations in the world. These three Franciscan Orders continue today, inspired by the saintly life of the little poor man of Assisi.

Two years before his death, Francis’ deep, intense love for Jesus was made evident in the most striking manner. While he was deep in prayer at his hermitage, his beloved Savior bestowed on Francis the Stigmata, “the last seal from Christ,” according to the medieval Italian poet Dante. Saint Bonaventure relates: “… the Lord Himself, who had secretly impressed these tokens, openly manifested many miracles by their power, that the hidden and miraculous virtue of these Stigmata might be clearly made known by many signs.”

Such was the renown gained by this humble little saint by the extreme degree of his union with God, affirmed by the imposition of the wounds of Christ on his body, that he was canonized only two years following his death. Still today, this lover of peace, of all God’s creation and every living being, remains one of the most beloved, popular saints for believers and non-believers alike.

Reflecting on the parable of the mustard seed (Mk 4:30 – 32) in our time, Bishop Robert Barron states, “Consider what God said to St. Francis: ‘Francis, rebuild my Church.’ God could have rebuilt his Church without Francis, but he wanted him to get involved.”

Perhaps this is the message Saint Francis would like for each of us to reflect on today as we celebrate his feast. The lay renewal movement sparked by him in his time led to great, much-needed reformation in the Church. Is the same not needed in our Church today? How can I follow Francis’ lead? Where is my place in the great renewal to come?

Saint Francis of Assisi, pray for us!