For the second year, the UK-based "1023 Campaign" sponsored a worldwide homeopathic overdose campaign in which demonstrators consumed mega doses of homeopathic drugs to demonstrate to the public that the products cause no harm because there's nothing in them. 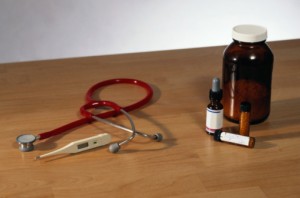 "To be clear – the homeopathic overdose is a stunt, and nothing more," writes Dr. Steven Novella, MD, associate professor of neurology at Yale University School of Medicine, on his popular NeuroLogica blog.

"It is not an experiment or meant to be scientific in any way. It is a stunt for the camera – to raise public awareness of the fact that there are generally no active ingredients in homeopathic products,"  Dr. Novella explains. "They are sugar pills that have been kissed with 'magic' water – nothing else."

The campaign is important, he says, because the public generally does not understand what homeopathic products are and tend to assume that homeopathic means "natural" or "herbal."

"In contrast to herbal remedies most homeopathic products contain no active ingredients; they are just sugar and water," explains the 1023 Campaign website.

"Even homeopaths will tell you this, though they will often go on to claim that the water and sugar contain some 'memory', 'vibration' or 'energy' from previous contact with another substance. It is this 'memory' which is said to cure, though homeopaths are unable to prove it exists."

This is precisely how Mike Adams, Health Ranger Editor at NaturalNews.com, described the products after writing a defense of homoeopathy in the days following the campaign. " . . . (H) homeopathy isn't a chemical. It's a resonance. A vibration, or a harmony. It’s the restructuring of water to resonate with the particular energy of a plant or substance."

That this is all a bunch of hooey has been proven again and again by controlled scientific testing. One of the latest and largest studies has been conducted by the UK Parliament's Science and Technology Committee which issued a strong recommendation in 2010 that the National Health Service stop funding homeopathy because there continues to be no evidence to support its efficacy.

Adding to the hype surrounding the 1023 Campaign event, famed paranormal investigator and skeptic James Randi offered one million dollars to any manufacturer of homeopathic medicines who could prove whatever claims were posted on their products. He was videotaped downing an entire bottle of homeopathic sleeping pills to show they had no effect.

The campaign is also aimed at major drug retailers such as CVS, Rite-Aid and Walgreens to get them to stop carrying the products. Seeing them on pharmacy shelves is one of many reasons why the public continues to believe in homeopathic drugs, even though almost no one knows that the only reason they are among the drugs recognized under the Federal Food, Drug and Cosmetic Act of 1938 is because they were grandfathered into the act by a homeopathic physician who was serving as a senator at the time. In 1970, dozens of these products were removed from the list and none have been approved since.

"Consumers have the right to know what they're buying," Randi said. "No one should walk out of a drugstore with a homeopathic product without knowing these basic facts: there is no credible evidence that the product does what it says; there is not one bit—not a single atom—of the claimed 'active ingredient' in the package; and no U.S. health agency has tested or approved the product. It should be a crime for retail corporations to profit by denying the public this critical information about the products on their shelves."