Prayer to the Sorrowful Mother
St. Alphonsus de Liguori
O my afflicted Mother! Queen of martyrs and of sorrows, thou didst so bitterly weep over thy Son, who died for my salvation; but what will thy tears avail me if I am lost? By the merit, then, of thy sorrows, obtain me true contrition for my sins, and a real amendment of life, together with constant and tender compassion for the sufferings of Jesus and thy dolours. And if Jesus and thou, being so innocent, have suffered so much for love of me, obtain that at least I, who am deserving of hell, may suffer something for your love. "O Lady," will I say with St. Bonaventure, "if I have offended thee, in justice wound my heart; if I have served thee, I now ask wounds for my reward. It is shameful to me to see my Lord Jesus wounded, and thee wounded with Him, and myself without a wound."  In fine, O my Mother, by the grief thou didst experience in seeing thy Son bow down His head and expire on the cross in the midst of so many torments, I beseech thee to obtain me a good death. Ah, cease not, O advocate of sinners, to assist my afflicted soul in the midst of the combats in which it will have to engage on its great passage from time to eternity. And as it is probable that I may then have lost my speech, and strength to invoke thy name and that of Jesus, who are all my hope, I do so now; I invoke thy Son and thee to succour me in that last moment; and I say, Jesus and Mary, to you I commend my soul.  Amen. 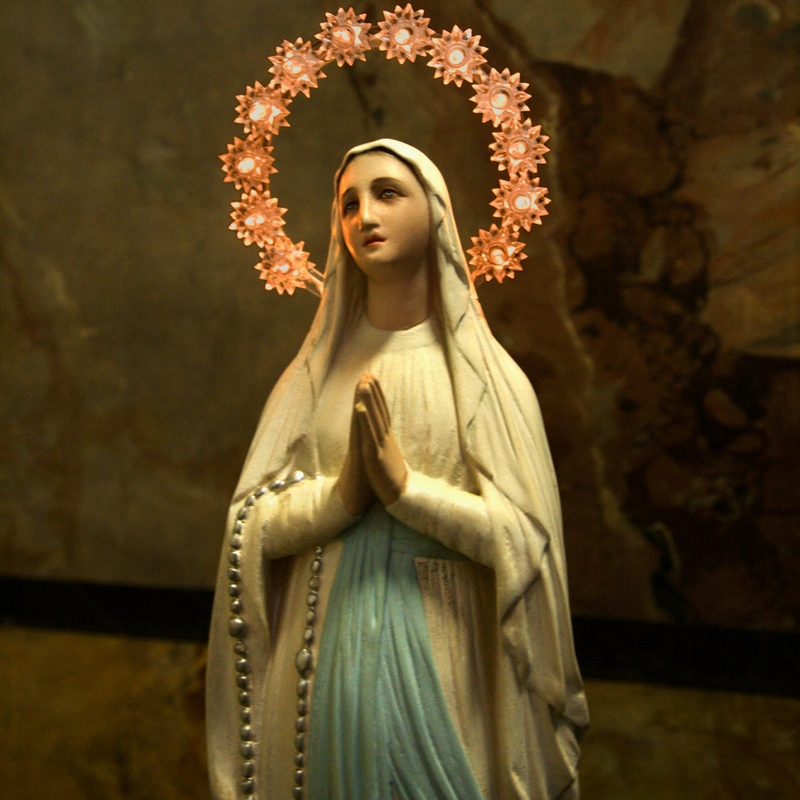 Today's Reflection:
The forty days' fast, which we call Lent, is a time set aside for prayer, penance, sacrifice and good works in preparation for the celebration of the Passion, Death and Resurrection of our Savior. This season of prayerful repentance has been the Church's preparation for Easter since the very commencement of Christianity.
"Our Blessed Lord Himself sanctioned it by fasting forty days and forty nights in the desert," writes Abbot Gueranger, OSB. "And though He would not impose it on the world by an express commandment, yet He showed plainly enough, by His own example, that fasting, which God had so frequently ordered in the old law, was to be also practiced by the children of the new."
The significance of the 40 day fast has a long biblical history. On Mount Sinai, preparing to receive the Ten Commandments, "Moses stayed there with the Lord for 40 days and 40 nights, without eating any food or drinking any water" (Ex 34:28), and Elijah walked "40 days and 40 nights" to Mount Horeb (I Kgs 19:8).  Lent is a word derived from the Anglo-Saxon lencten, meaning "spring" and lenctentid, which means "springtide" and, more literally, "March," the month in which the majority of Lent falls.
Evidence exists that the marking of Lent existed in the time of the apostles. In the second century, St. Irenaeus (d.203) wrote to Pope St. Victor I about how differently Catholics in the East and West practiced the fasts of Lent. "The dispute is not only about the day, but also about the actual character of the fast. Some think they ought to fast for one day, some for two, others for still more; some make their 'day' last 40 hours on end. Such variation in the observance did not originate in our own day, but very much earlier, in the time of our forefathers" (Eusebius, History of the Church, V, 24).
Although Lent existed from the time of the Apostles, it would not be until the legalization of Christianity in A.D. 313 that its practice became set at 40 days and made more uniform throughout the Church. The disciplinary canons of the Council of Nicea (325) made note of the "40 days of Lent" and in the same century, St. Athanasius (d. 373) was known to have implored his congregation to make a 40-day fast prior to the more intense fasting of Holy Week. St. Cyril of Alexandria (d. 444) also made note of both the practices and duration of Lent. Pope St. Leo (d. 461) preached that the faithful must "fulfill with their fasts the Apostolic institution of the 40 days," again noting the apostolic origins of Lent.
As of today, how is your Lent going so far?  Where is God calling you to go deeper with prayer, fasting and almsgiving?  If you are looking for Lenten ideas, click here for a great tool to help you at this time!
Sign Up to receive the Lenten Journey with Mary via email! Click Here!