Dr. Mehmet Oz is planning to host a show today which will feature Paul McKenna, a popular UK self-help hypnotherapist who is planning "to hypnotize America" in an effort to cure "emotional eaters." 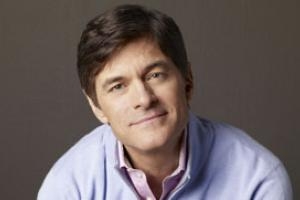 Dr. Oz broke the news on Good Day LA on Friday, pitching today's show as being "one of the biggest shows" he's ever produced. It will feature Paul McKenna, a hugely popular New Age self-help guru who is currently Britain's best-selling non-fiction author. McKenna is best known for using hypnosis and a controversial technique known as neuro linguistic programming to cure people of their phobias and help them lose weight. Now living in Los Angeles, McKenna intends to tap into the American market for New Age fads and claims to have already helped Ellen DeGeneres quit smoking. Dr. Oz says today's audience should just “sit back on your sofa, turn the TV on, look into the camera and let McKenna work on helping you unbind yourself and unchain yourself from the emotional burden that you’ve been bearing …..” When asked by the Good Day LA host if it was possible to hypnotize someone via television, Oz nods yes, then says with great excitement, "It's illegal in some countries!" The other host asks, "But isn't that dangerous?" Oz never really answers him. He just says, "The interesting thing about hypnosis . . . you can't force someone to do something they don't want to do. Hypnosis is all about freeing you to do what you want to do. So if you want to stop smoking, hypnosis is a wonderful tool, but if you don't want to stop, it's not going to work on you." But what about the dangers of luring people into a hypnotic state with no direct supervision? What Oz fails to explain is that the reason it's illegal in some countries is because of the danger of adverse posthypnotic reactions to hypnosis which are very well known. To just indiscriminately hypnotize a mass audience of people is downright irresponsible. But maybe we should not be too surprised, After all, this is the same physician who came under heavy criticism from his colleagues for practicing Reiki on patients in the operating room. It's a shame that this brilliant physician is being led down such a dark path - and taking so many people with him! Let us keep this man and his followers in our prayers.