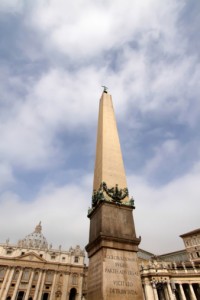 This is an excellent question which I found very interesting to research. The obelisk has different meanings depending on the culture. It's name comes from the Greek work obeliskos, which is derived from obelos meaning "needle," and is usually made of a single piece of stone (a monolith). For pagans, the obelisk was a solar symbol that represented a vital flow between heaven and earth, a way of communicating with the divine. The ancient Egyptians regarded them as symbols of the sun god Ra and placed them in pairs at the entrance to their temples. The obelisk is also regarded in the occult as a phallic symbol. When it is erected inside a circle, this is supposedly representative of the sex act. (The Vatican obelisk is erected within a circle, but this circle is actually a sun dial.) Masons  have a similar view of the obelisk. One Masonic writer,  H.L. Haywood, writes: "In some cases these crude rock pillars were thought to be the abodes of gods or demons: in others, homes of ghosts; and often as symbols of sex. Of the last-named usage one writer has said that 'pillars of stone, when associated with worship, have been from time immemorial regarded as symbols of the active and passive, the generative and fecundating principles, twin builders and supporters of the heavens..." The graves of Masons can often be spotted in graveyards because many of them have headstones carved in the shape of an obelisk. According to the website of St. Peter's Basilica, the obelisk standing in St. Peter's Square came from Heliopolis, Egypt where it was believed to have been built by the Pharaoh Mencares in 1835 B.C. in honor of the sun. It is hewn from a single block of pink granite and stands 25.31 m high on a base that is 8.25 m wide. It was brought to Rome by Caligula in 37 B.C. and intended to be erected in the Vatican Circus. "Here it was a silent witness of the martyrdom of St. Peter and many other Christians," the site explains. In 1586, Pope Sixtus V had it moved to the center of St. Peter's Square, an enormous undertaking that required more than 900 workmen, 140 horses and 44 winches. The large metal ball on the top of the obelisk was long thought to contain the ashes of Julius Caesar, but during the relocation process, this ball was removed and found to be empty. The Pope replaced the ball with a cross containing a relic of the true Cross because he wanted to put an end to this "impure superstition" by means of the invincible cross. Originally inscribed to "Divine Augustus" and "Divine Tiberius" it was rededicated to the Holy Cross - "Christus Vincit, Christus Regnat, Christus Imperat. Christus ab omni malo plebem suam defendat." I found it very interesting to note that the Vatican's obelisk has formulas of exorcism inscribed into the east and west sides. The obelisk in St. Peter's Square may have come from a pagan culture but it has been thoroughly "baptized" and now stands where it does as an expression of the conquering power of the Church.