TV asks: "I am wondering about the Law of Attraction material.  Jerry and Ester Hicks are the people who channel Abraham. Is there any truth in their teaching?  Sometimes it sounds like it makes sense." 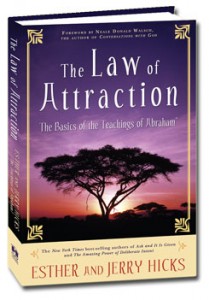 Jerry and Esther Hicks are the authors of the Law of Attraction, which is just another manifestation of the "New Thought" movement that has been around since the 19th century. The prophets of this movement all believe that a person can create their own reality just by thinking it into existence. "What the mind can perceive, the body can achieve," they like to say.

It's the same premise behind enormously successful books such as The Power of Positive Thinking, Dianetics, and The Secret.

Now for some background.

Jerry and Esther Hicks are two psychics who claim to be channeling a cluster of spirits who call themselves "Abraham." They claim these spirits communicated the Law of Attraction which is a belief that nothing happens by accident and that we attract whatever comes our way because of the way we think.

"Nothing merely shows up in your experience. You attract it—all of it. No exceptions . . . We must still explain that only you could have caused it, for no one else has the power to attract what comes to you but you. By focusing upon this unwanted thing, or the essence of it, you have created it by default" (p. 30).

If this were true, it would mean that children who suffer abuse, people who are victims of homicide, disease or war, all brought these ills upon themselves.

Even though many people claim to have been helped by the Hicks' writings, I'm sure there are plenty of other people who have had traumatic experiences in their life, through no fault of their own, who were left very disturbed by this twisted and heartless logic.

Jerry Hicks, a self-professed psychic, claims he learned how to channel spirits by using a ouija board. Later, in 1965, he discovered another purveyor of New Thought, Napolean Hill, whose book Think and Grow Rich gave him goosebumps all over. He put the book's teachings into practice and became a successful businessman.

He eventually met and married Esther, who would at first denounced the ouija board as the instrument of the devil, but eventually warmed to the idea of contacting spirits. She and Jerry visited a psychic who claimed to be channeling a spirit named "Theo" and it was this person who encouraged them to meditate. The first time they tried it at home, Esther claimed she felt like she was floating and that something was "breathing" her, forcing air in and out of her lungs.

"After the session Esther's teeth buzzed, not chattered but buzzed," describes one on-line biography. "Later she came to realize that this was her first experience with 'Abraham'."

If that sounds wacky, you haven't heard anything yet.

After about nine months of meditating, Esther took notice of the way her head was bobbing around during the sessions and she suddenly realized what the  movement was - her nose was writing in the air. (I'm not making this up.) Her nose spelled out "I am Abraham. I am your spiritual guide. I love you. I am here to work with you."

Esther proceeded to spend about two hours every day writing out messages from Abraham with her nose.

"Then, one night in bed, Esther's hand began to thump on Jerry's chest. 'That's not me' announced Esther, 'It must be them.' She felt urged to go to the keyboard. Her fingers were powerfully driven and she typed 'iwanttotypeiwanttotypeiwanttotype ...' for a whole page before spelling out a request for her to spend a few minutes each day in this manner."

And then one day, just as the couple was driving on a freeway between two 18-wheelers, Esther got scared and said she felt her jaw wanting to move the way it does just before you yawn. Just then the words emerged, "Take the next exit" which she believed was Abraham speaking through her. 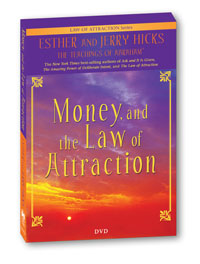 "At first they were reluctant to share this with anybody but close friends, but after about a year, they started to open up to a wider audience. This was the beginning, for Jerry and Esther, of the exhilarating journey - the seminars, the writing of the books and the very public appearance of Abraham in the world."

The following is a sampling of some of Abraham's teachings:

• You are a physical extension of that which is non-physical (the Universe). You cannot die; because the non-physical side of you is eternal. Your natural state is good health and well-being. You may appropriately depart your body without illness or pain.

• You are here in this body because you chose to experience this life and its contrasts. You have the freedom to choose whatever you wish.

• You are a joy-seeker and you formulate desires from your experiences. Actions to be taken and money to be exchanged are by-products of your focus on joy.

• The Universe adores you for it knows your broadest intentions. All is well.

Needless to say, there are many serious problems with Jerry and Esther Hicks and all of the words of wisdom they claim to be getting from a lovable spirit guide (aka demon) named Abraham.

Psychic activities, such as channeling, are expressly forbidden by the Church because of the grave danger a person invites upon themselves by dabbling around in the supernatural world. This dimension is very real, and the beings that inhabit it are either God, angels/demons or disembodied human spirits (who are not capable of contacting the material world without their bodies- see Ghosts ).  Avartars, ascended masters, spirit guides do not exist. They are nothing more than nebulous terms invented by New Agers, most of whom do not believe in the devil.

For this reason, the Catechism teaches us to reject all forms of divination such as consulting horoscopes, consulting psychics and mediums, conjuring the dead, etc. either for divining the future or some other "secret" information. (No. 2116)

We are also forbidden to practice any kind of magic or sorcery "by which one attempts to tame occult powers, so as to place them at one's service and have a supernatural power over others - even if this were for the sake of restoring their health." (No. 2117)