So many people I know who were misled into Centering Prayer told me one of the main reasons they were "sold" on it is because proponents claimed St. Teresa of Avila and other Carmelite mystics taught it (although I've never seen any direct quotes from the works of these saints to prove this). Others bought into it after being introduced to the writings of a 14th century anonymous author of a book entitled The Cloud of Unknowing. This blog contains a few facts that will prove these assertions to be incorrect. St. Teresa of Avila 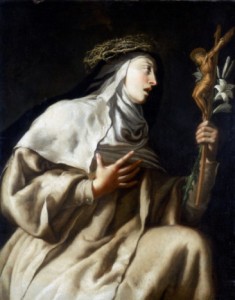 In "The Guidelines" for Centering Prayer that are published and disseminated by Contemplative Outreach, Ltd., persons are instructed to use a mantra anytime a thought (including body sensations, feelings, images and reflections) enters the mind. Note: this method is derived from Transcendental Meditation, a practice which founder, Fr. Thomas Keating, admittedly allowed to influence his creation of Centering Prayer. As the pamphlet instructs: "Having chosen a sacred word [mantra], we do not change it during the prayer period because that would be to start thinking again." (Another interesting note: after intense criticism, the group added a claim at the end of the pamphlet that their aim is not to "blank the mind" although one can hardly find much of a difference between "not thinking" and a blank mind. This is what St. Teresa has to say about people who try to impose such practices on themselves in an effort to mimic what God does to the mind in authentic contemplation when He suspends its operations. "Taking it upon oneself to stop and suspend thought is what I mean should not be done; nor should we cease to work with the intellect, because otherwise we would be left like cold simpletons and be doing neither one thing nor the other. When the Lord suspends the intellect and causes it to stop, He Himself gives it that which holds its attention and makes it marvel [note: He doesn't blank the mind, but takes control of its thought processes and infuses those He wishes the soul to contemplate]; and without reflection it understands more in the space of a Creed than we can understand with all our earthly diligence in many years. Trying to keep the soul's faculties busy and thinking you can make them be quiet is foolish." (The Book of Her Life - Chapter 12) As if that's not enough to convince Centering Prayer enthusiasts of St. Teresa's complete disdain for what is one of their most fundamental practices, perhaps the following will convince them. " . . . (E)ven though it may not be understood, this effort to suspend the intellect is not very humble." Authentic contemplation comes from God; it cannot be forced by employing a technique. In essence, one is trying to "force God's hand" and demanding that it be given the gift of contemplation. This is hardly the kind of humility that is, in fact, a prerequisite for receiving this gift! The Cloud of Unknowing Another fallacy being spread by Centering Prayer enthusiasts is that a writing by an unknown 14th century mystic, entitled The Cloud of Unknowing, was teaching centering prayer. This book taught nothing of the kind. In fact, well-known theologian Harvey D. Egan, S.J., who studied under Karl Rahner, specifically discredits claims that The Cloud taught a kind of Centering Prayer/Transcendental Meditation. In his seminal book, The Anthology of Christian Mysticism, Egan claims that the author's teaching "is neither a  medieval form of transcendental meditation, nor yogic nascience." While The Cloud author uses a mantra in prayer, it was not to block all thoughts but to help one to stay focused on forgetting self and preconceived notions of God in order to pray in "naked love." However, as Eagan points out, The Cloud author presupposes a person to be experienced in asceticism and self-knowledge, and to be very advanced in the spiritual life as well as deeply conformed to the Gospel - PLUS being called to this type of prayer by God - before attempting to enter into it. In other words, this isn't something you teach in weekly faith formation classes to anyone who walks in the door. In conclusion, it is interesting to note the work of Fr. Augustine Ichiro Okumura, OCD, who was born a Buddhist and currently serves as a leader in the Zen-Christian dialogue in Japan. In his book, Awakening to Prayer, he stresses that the concept of silence in prayer does not mean the absence of thought. "Remaining in silence before God does not mean that there are no thoughts, reflections or words. But rather than speaking to God and telling God our needs, this third way of prayer puts more emphasis on listening to God." He goes on to explain that the word "listen" is one of the most important words in Scripture. It appears in the Old Testament more than a thousand times and 425 times in the New Testament. "Let anyone with ears listen" was one of Jesus' most oft repeated phrases. In Scripture this word means not just to hear, but to listen with attention. "To 'listen to God' then is not merely to hear God. It also requires that we pay attention to God's words and 'treasures all these things and ponder them in our heart'," Fr. Okumura writes. It saddens me to consider all those who are genuinely seeking God in prayer but who are right now sitting in an empty void - chanting mantras to keep out all thoughts - even those coming from the very God they seek. Let's all keep them in prayer with the hope that they will soon see the light and disengage themselves from this deeply flawed concept of prayer.