DD asks: "Can you explain tai chi, and what is wrong with it from a Christian point-of-view?" 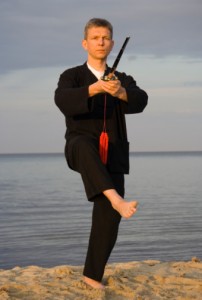 Tai chi (pronounced “tie chee”) is a mind-body practice that originated in China as a martial art. Also known as “moving meditation” a person doing tai chi moves his body slowly and gently, while breathing deeply and meditating. Practitioners believe tai chi helps the flow of an alleged vital energy or life force called “qi” that supposedly regulates a person’s body, mind and spirit. Qi must be able to move freely for good health. Tai chi also aims to harmonize yin/yang, which are believed to be two opposite and complementary forces in the universe. The motions of tai chi are designed to imitate motions found in nature, such as the movements of animals, thereby uniting human beings with the natural world. The National Center for Complementary and Alternative Medicine (NCCAM) at the National Institutes for Health say that while accounts of the origin of tai chi differ, the most consistent explanation concerns a 12th century Taoist monk named Chang San-Feng (or Zan Sanfeng) who observed the movements of five animals – a tiger, dragon, leopard, snake and crane. He concluded that the snake and the crane, through their movements, were the most able to overcome strong, unyielding opponents. Chang developed an initial set of exercises that imitated the movements of these animals. This form of movement has been practiced in China for centuries and is still a daily routine for tens of thousands of people there, especially the elderly. It was first introduced to the United States in the early 1970s and has since grown in popularity. According to the University of Maryland Medical Center, there are three major components to tai chi: movement, meditation and deep breathing. Tai chi sessions are usually group classes that last about an hour. Typically, an instructor guides the class through a series of 20 to 100 tai chi movements that together comprise a "form." A form can take up to 20 minutes to complete. Each form has a nature-based name that describes its overall action—such as "wave hands like clouds" or "grasp the bird's tail." While performing these movements, students are asked to focus on the point just below their navels, believed to be the center from which qi flows. The teacher encourages the class to perform all movements in a slow, meditative manner and to focus on deep breathing. At the end of the class, there is usually a wind-down exercise, relaxation, and meditation Practitioners recommend practicing tai chi for about 15 to 20 minutes twice daily at home, since regular practice is essential for mastering the forms and achieving lasting results. People practice tai chi for a variety of reasons; to improve their physical condition and sense of balance, ease pain and stiffness (particularly from arthritis) and improve sleep. The NCCAM issues several warnings about tai chi. There is no standard training for teachers in the United States and people are not required to be licensed, which means it is not regulated by state and/or federal governments. They also warn that tai chi is based on the existence of a life force energy that science has never been able to substantiate.   “Since little is known scientifically about tai chi, accepting its teachings is a matter of belief or faith rather than evidence-based science,” the NCCAM states in a published backgrounder on the practice. http://nccam.nih.gov/health/taichi/introduction.htm The belief that a life force energy pervades all of nature is known as pantheism and is not compatible with Christianity. The Pontifical Councils for Culture and Interreligious Dialogue called this impersonal energy force a “New Age god” in their document, Jesus Christ the Bearer of the Water of Life. “This is very different from the Christian understanding of God as the maker of heaven and earth and the source of all personal life,” they write. “God is in himself personal, the Father, Son and Holy Spirit, who created the universe in order to share the communion of His life with creaturely persons.” In additionally, many non-Christian beliefs are intrinsic to tai chi. An article published by Catholics United for the Faith entitled “Hold Fast What is Good: On Borrowing Forms of Meditation from Eastern Religions “ points out that “even though Tai Chi is often used as a means of exercise and relaxation, as well as a martial art, it has its origins in the Chinese religion of Taoism. “Although there is nothing objectively wrong with the physical movements of Tai Chi, there are many philosophical elements contrary to Christianity. The idea that the physical world comes from dualistic principles, which in turn come from an ultimate force, cannot be reconciled with the idea that the universe was created by an all-good, personal God. Furthermore, the attempt to channel and direct spiritual forces and the use of talismans violate the First Commandment (cf. Catechism, no. 2117).”