GM writes: "My mother's therapist recommended Women's Reality by Anne Wilson Schaef and another by Melody Beattie. What I found on Anne Schaef and what I read in the foreword troubled me and I told her this, but she thinks that she's strong enough in her faith that she can take what she like's and leave the rest; however, what I found about Beattie was hard for me to decipher one way or the other. What should I tell her?" You have good reason to fear for your mother and the therapist who is recommending Anne Wilson Schaef and Melody Beattie. My advice is for you to ask your mother to read this blog and then consider finding a new therapist. 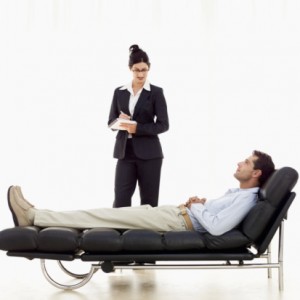 The field of pscyhology is filled with talented and innovative professionals, but some of them are heavily involved in the New Age and have incorporated these ideas into their work. About the only way to protect yourself is to stick with a Christian or Catholic therapist, or be willing to put the time into researching the practice of a particular therapist (including speaking to their clients) to be sure they are not foisting their own philosophies and world views onto their clients. The two people you mention in your post are the perfect example of why this is so necessary. Let's take the least problematic one first - Melody Beattie. While Ms. Beattie is a highly respected expert in co-dependence, she is definitely into the New Age. Here's what one reviewer had to say about her book, Journey to the Heart:  "There's nothing much wrong with this book as volumes of New Age philosophy go, but it doesn't break any new ground, either. The framework derives from an actual automobile trip that Beattie took across the West with stops at mystical sites such as Sedona, Arizona, and Chaco Canyon, New Mexico. . . . . Perhaps best known for Codependent No More (1989), Beattie has added the New Age crowd to her followers. Expect demand where crystals glimmer." Anne Wilson Schaef is a much more serious matter. This woman was once denied entrance to New Zealand because of all the problems associated with her workshops which are described in the following article as being dangerously cult-like. She has also been accused of sexual misconduct with her female clients. This February 25, 2001 article appearing in the New Zealand Star Times  paints a very disturbing portrait of Anne Schaef and her work. Here's an excerpt from the article: During the past 10 years more than 3000 people have been involved in her New Zealand workshops, according to former client Warren Smith of Christchurch. . . .  After attending several of her workshops he realized something "very sick" was happening, he told the Star-Times. 'I saw people becoming clones of her. I saw people being psychologically traumatized by her methods. I'm talking serious emotional trauma and unnecessary stress that was intentionally being laid on them. Basically their minds were being screwed." Smith said Schaef's workshops, which ran from early morning to late at night over three days, caused many people to break down and become dangerously distressed. Many became suicidal. "Especially if you challenged or questioned anything. You were told you were sick and crazy, that you were in your disease," Smith said. In 1992, Schaef was sued by a former American client for breach of fiduciary duty. Vonna Moody said Schaef had had a sexual relationship with her while she was her therapist. Schaef settled for $US250,000 about a week before the case went to court. June Dawrant, another former client now living in Brisbane, said she had attended Schaef's workshops after reading one of her books. "The blurb on the back cover assured me she was a qualified psychologist. I went to a workshop, then joined as a trainee with some other friends." But she very quickly became concerned about some aspects of the training, Dawrant said. "I am still so appalled at the psychological muggings I saw inflicted on people. I am shocked that group dynamics could be put to such abuse. Worst of all, I witnessed first-hand terrible trauma experienced by many victims who had been ridiculed, humiliated and attacked by the leader and members of the group over long, intense periods of time.  Any good that might have been done for some was far outweighed by the huge damage to others," Dawrant said. "The trauma those victims experienced was severe. Some were suicidal; others needed professional help to overcome the damage. Years later most are still affected and still very scared." Not only would I avoid this woman's writings, but I would seriously question any therapist who recommends her to a client. Send your New Age questions to newage@womenofgrace.com