RH writes: "In the radio show last Friday a caller asked about acupressure for allergies, and I found a way to 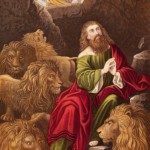 reduce the "acting up" of my allergies by following the "Daniel's Diet in the book Daniel 1:8-17. I ate only veggies for 3 weeks and then fruits and veggies for 5 weeks, as a result I have lost 33 pounds, reduced my blood glucose and cholesterol. My mom who did this diet twice already has also seen big improvements in her health. I hope he listens to you in the next live program so you can give him this Diet." Our thanks to RH for sending us this information. We did indeed counsel this caller to forget about acupressure for allergies. Acupressure/acupuncture has no scientific support and the only relief people feel from it is the result of the placebo effect. More importantly, it's based on beliefs that are not compatible with Christianity. As for the Daniel Diet, this was created by a naturopath named Philip Bridgeman, and is essentially a vegan diet adapted from the first chapter of the Book of Daniel. This is supposedly the diet adopted by Daniel as a way to avoid defiling himself with royal rations. He convinced a guard to give him and his followers only vegetables and water for 10 days instead of the royal rations. At the end of the 10 days, when Daniel and his followers were found to be more fit than those who received the royal rations, they were allowed to follow this regimen permanently. Proponents of the Daniel Diet claim that this diet brings about spiritual closeness to God because of the Scripture that reads: "To these four young men God gave knowledge and skill in every aspect of literature and wisdom: Daniel also had insight into all visions and dreams." (Dan 1:17) Of course, no diet can do this, only a proper disposition of the soul. Christians fast to bring themselves closer to God, but this has nothing to do with the food that is (or isn't) eaten. It's all about mastering one's appetites (passions) to make the body subject to the spirit and thus become more open to God's will. The Daniel Diet can be used permanently, or as a 10-21 day fast (known as the Daniel Fast). On this diet, there is no meat, white rice, white flour, fried foods, caffeine, alcohol, carbonated drinks, refined sugar or sugar substitutes, margarine, shortening, fats or any foods with preservatives or additives. An independent review of the diet as presented in the Daniels' Fast Cookbook was found to promote healthy eating habits and weight loss without the use of drugs. However, it was also found to be low in Omega 3, Calcium, Vitamin B12, and iron, which means supplements would have to be taken "to avoid long term problems." It also had an insufficient emphasis on the need for exercise. (See www.dietspotlight.com) Send your New Age questions to newage@womenofgrace.com