As promised, here is a description of another flyer being distributed by JM's library: "The 2nd flyer they were handing out read: 'The Concord Library Presents A Day of the Dead Celebration November 2nd 2010 at 3.30pm.  -  Celebrate and learn about Mesoamerican culture. Aztec dancers will be performing and educating us about the meaning behind each dance. We will also make pinatas and set up altars to relive the experience of this prominent event'." 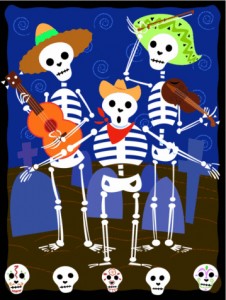 Although the flyer seems to be hyping the pre-Christian roots of this celebration, the Day of the Dead is celebrated today in many Catholic countries throughout the world. This holiday has its roots in an ancient pagan belief that between October 31 and November 2, the dead visit the living. In order to welcome the return of deceased loved ones, families would erect special altars or "memory tables" in the home which contained momentos and other personal effects of the departed, even leaving out the deceased's favorite foods and drink.  During this celebration, which now takes place on the Feasts of All Saints and All Souls (Nov. 1 & 2) people would also visit the graves of their relatives to decorate and clean the sites. The roots of the Day of the Dead can be conclusively traced back to the time of the Aztecs but may date as far back as the Olmec civilizations which thrived from 1200 to 400 B.C. These pagan cultures celebrated the Day of the Dead for a month (from mid-July to mid-August). The Aztecs believed the time was presided over by Mictecacihuati, the Lady of the Dead, and Huitzilopochtli, the god of war. The Day of the Dead was celebrated throughout central America in its original pagan form until the conquistadors brought Catholicism to the area. The practice was then shortened from a month to the same two days the Church has set aside to honors the dead, namely the feast of All Saints and All Souls. While many people celebrate the Day of the Dead by attending Mass, other cultures still include the earlier pagan rituals. The event JM's library hosted appeared to be more focused on the earlier pagan versions of the holiday with its emphasis on "Mesoamerican culture" and the inclusion of Aztec dancers. This could be problematic, depending on what material is included in the library's presentation. This is because the Mesoamerican people, which include the Maya, Aztec, Toltec and Olmec peoples, all embraced pagan concepts of death. For instance, the Aztecs believed the earth was a "force" of death that had to be constantly satiated with human life. They were known to sacrifice as many as 250,000 people a year in order to appease this "force" and the hunger of other deities. They also believed that people had three souls that could either go on to the afterlife, become a god or remain on earth to help the family. They developed rituals to honor the souls of the dead who stayed behind to help them which included leaving food for their dead, burning incense, or making some other offering, all of which are still part of Day of the Dead celebrations today. (Remember, it was into this culture that Our Lady of Guadalupe appeared to St. Juan Diego in the 15th Century, an apparition that led to the conversion of millions of Aztecs and, subsequently, the cessation of the rampant human sacrifice in that culture.) Because JM's library is also circulating flyers touting the latest Twilight movie and presentations about non-Christian meditation techniques (see yesterday's blog), I think it's safe to assume that their presentation of the Day of the Dead is probably not going to focus on the Christian celebration of All Saints and All Souls Day. Send your New Age questions to newage@womenofgrace.com