NOTE: THIS BLOG WAS REVIEWED AND UPDATED IN DECEMBER, 2019.

JD asks: "Could you please explain to me why chiropractics is listed as New Age in the Pontifical document, Jesus Christ, The Bearer of the Water of Life?  What are its New age connections?" 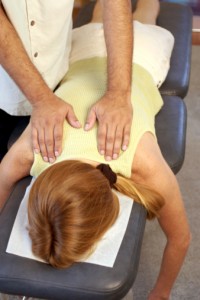 This is one of several questions we have received about chiropractics, and why the Church specifically lists it as being associated with New Age.

As JD correctly states, the Pontifical document, Jesus Christ the Bearer of the Water of Life, does indeed list chiropractics as being associated with the New Age.

Aside from the fact that many chiropractors dabble in New Age healing techniques such as Reiki, Therapeutic Touch and the Traditional Chinese Medicine form of acupuncture, the reason this field is so often affiliated with the New Age is because of its occultic roots.

Daniel David Palmer (1845-1913), the founder of chiropractics, was an occultist who was known to attend the same spiritualist meetings in Clinton, Iowa, as the founder of osteopathy, A. T. Still.

Palmer, who taught a pseudoscience known as phrenology (based on the idea that personality traits can be determined by the shape of the skull) did not hide the fact that he was a non-believer. In 1905, during a coroner’s inquiry, he refused to take an oath to swear the truth “so help me God” because, as he said, “I don’t want any help from God.”

It is widely believed that Palmer invented chiropractics on Sept. 18, 1895 when he adjusted a bump on the spine of a deaf janitor and restored his hearing. This led to his conclusion that misaligned bones (known as “subluxations”) interfered with the body’s expression of Innate Intelligence – a kind of universal energy or life force.

The concept of Innate Intelligence came from another popular healing technique of his day known as magnetism (aka animal magnetism), which was a revival of an ancient idea that the planets exude invisible rays of energy that affect our bodies. Palmer believed Innate Intelligence was comprised of this and other spiritual forces.

He also believed that the pathway of “innate intelligence” into the body was the human nervous system, especially the spinal cord.

When a bone was out of joint, Palmer relied upon methods used by another popular fixture in 19th century health care, the bonesetter, who would wrench or push the bone back into place. This is why the name chiropractic originates with the Greek word for bonesetting, which essentially means “hand work.”

Although self-taught, Palmer considered himself a scientist and passed on his science to his son, Bartlet Joshua (“B.J.”) Palmer (1882-1961). Young Palmer started out his career working as an assistant to a professional circus hypnotist, but eventually came up with enough money to build a school for chiropractics.

Like his father, B.J. was also involved in the occult and liked to encourage the idea that he was a Christ figure. Early New Age guru Napoleon Hill (Think and Grow Rich, 1937) considered B.J. his mentor. B.J. also hob-nobbed with prominent Masons and other influential people, which led to the use of chiropractics by John D. Rockefeller. In 1963, Nelson Rockefeller was successful in getting chiropractics legalized in New York and appointed chiropractor Albert Cera to his Medical Advisory Committee.

Even though chiropractics has dubious roots, it is very important to understand that Palmer’s notion of Innate Intelligence has been in dispute since the very beginning of this profession. According to a report by the American Medical Association (AMA), many of his first disciples, who would become some of chiropractics most influential teachers, refused to adopt it, calling it “religious baggage.” This led to the first chair of the Council for Chiropractic Accreditation, Claude O. Watkins (1909-1977), to call for scientific research and the abandonment of all cultist and vitalist principles in their profession.

“Today, a substantial number of chiropractors are anxious to sever all remaining ties to the vitalism of innate intelligence,” writes Ted J. Kaptchuk OMD and David M. Eisenberg MD for the AMA.”For these practitioners, the notion of the innate serves only to maintain chiropractic as a fringe profession and to delay its transition into legitimate professional education, with serious scholarship, research and service.”

Many of Palmer’s followers also amended his idea of subluxation by expanding it to mean more than just bone displacement but also to involve joint mobility, blood flow, muscle tone and the condition of the nerves.

As Kaptchuk and Eisenberg explain, the Palmers believed chiropractics was not just the best way, but was the only way to treat disease. Those chiropractors who agreed with them, who relied solely upon spinal adjustment and emphasized “innate intelligence” were called “straights.” Those who disagreed and were open to conventional medical practice and to mainstream scientific tenets were known as “mixers.” The schism between “straights” and “mixers” persists to this day.

However, it's important to note that according to some surveys, Palmer's views of Innate Intelligence to be pervasive throughout the industry, regardless of whether a chiropractor refers to himself/herself as "straight" or "mixer." This poses problems for  Christians because websites and brochures often couch these beliefs in scientific language that makes it difficult to discern. A good method is to review the clinic's services and look for any that are based in New Age and/or non-Christian beliefs such as muscle testing (aka applied kinesiology), acupuncture, Reiki, etc.

This is true also because chiropractors are not medical doctors and to rely upon them to diagnose or cure disease is unsafe. To practice in the U.S., a practitioner must earn a Doctor of Chiropractics (D.C.) degree from a college accredited by the Council on Chiropractic Education which is the agency certified by the U.S. Department of Education. Admission to a chiropractic college requires a minimum of 90 semester hours (3 years) of undergraduate study, mostly in the sciences. Training includes coursework in the biomedical sciences as well as public health and research methods. Some chiropractors go on to pursue two to three year residencies for training in a specialized field. Chiropractics is regulated by the state and board examinations are required for licensing.

Although still considered to be a form of “alternative medicine,” chiropractics is now mainstream in the U.S.  The National Institutes of Health (NIH) reports that in one year alone, approximately 18 million adults and two million children received chiropractic or osteopathic manipulation. The typical reasons why people seek chiropractic care are for chronic pain-related health conditions such as low-back pain, neck pain, and headache.

However, there are risks to chiropractic care, particularly in the area of neck manipulation and strokes.

The Chiropractic Stroke Victim’s Awareness Group LLC has up-to-date information on this risk on their website: http://www.chiropracticstroke.com/

The Chiropractic Injury Lawyer Blog also contains many relevant articles about the risks of chiropractics: http://www.chiropracticinjurylawyer.com/index.html?page=2